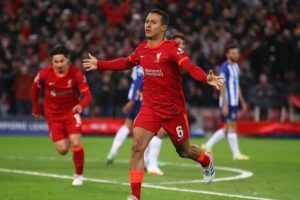 Thiago Alcantara’s spectacular strike in Liverpool’s win over Porto in the Champions League is the latest example of the midfielder proving former Reds hero Didi Hamann wrong. Hamann had raised doubts over the Spaniard’s suitability for Jurgen Klopp’s side amid his struggles to adapt to the Premier League last season.

But in his second campaign on Merseyside, Thiago had truly found his feet, impressing in his nine appearances so far this term.

He had been sidelined with a calf injury for nine games, but his quality has shone through particularly in his last two outings.

Thiago started in midfield in the dominant 4-0 trashing of Arsenal last weekend, keeping his place for the visit of Porto in the Champions League.

The 30-year-old was the senior member of the Reds midfield at Anfield on Wednesday and put in a performance to match that status.

He kept Liverpool ticking well, enjoying a pass success percentage of 86 per cent, winning seven duels and succeeding in two of his three dribbles.

But the highlight of his night was undoubtedly his stunning goal, which set Liverpool on their way to a fifth successive win in Group B.

After a lacklustre first-half, Liverpool won themselves a free-kick midway into Porto’s half early into the second period.

Alex Oxlade-Chamberlain saw his ball in headed clear by Otavio, but that clearance landed perfectly for Thiago.

The Spanish international ran onto the ball, connecting with it beautifully to drill it between the legs of Fábio Cardoso and into the bottom corner.

That strike is the latest evidence of Thiago proving former Liverpool star Hamann wrong, with the German having raised doubts about him soon after his arrival last season.

“I just feel that Thiago… everyone was raving about him coming to Liverpool but he’s hardly played,” Hamann told talkSPORT in January.

“He is a good player, he is a skillful player, but there was never a time in Munich where people said, ‘he’s got to be the first name on the team sheet’. So I’m very cautious when it comes to Thiago.

Liverpool boss Jurgen Klopp certainly does not support Hamann’s view, insisting after the Porto win that the goal was something Thiago has always been capable of.

“Whoever sees Thiago in training knows he has the technique to do it but it doesn’t happen constantly,” he said.

“It was a thunderball, a great goal. We needed some luck, they came through and had some big chances but didn’t score, and we scored twice and controlled the second half.”

The Reds had already secured top spot in their group heading into the visit of Porto, but Wednesday’s win did move them 10 points clear of their second-placed opponents.