Daniel Arzani can see some of himself in Garang Kuol and his quick rise to prominence.

Four years ago, the then Melbourne City teenager was the youngest player at the 2018 World Cup, after earning a Socceroos call-up off the back of an impressive, albeit limited, body of work in the A-League.

He came off the bench in all three of Australia’s matches against France, Denmark and Peru, and was one of the team’s most potent attacking outlets. When he signed for Manchester City, the country’s next great hope was seemingly on the fast track to the highest level. 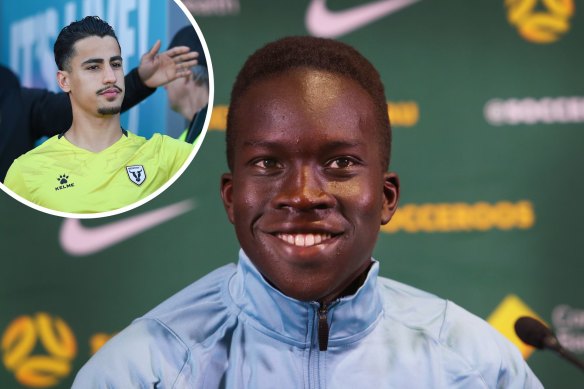 These days, Arzani is 23, rebuilding his career in the A-League with Macarthur FC after failed stints in Scotland, the Netherlands, Denmark and Belgium, and is on the outside looking in at the national team. Based on the early signs in pre-season, during which he has helped the Bulls reach next weekend’s Australia Cup final at CommBank Stadium against Sydney United 58, he’s still got it – and a strong start to the season might yet get him back in green and gold in time for Qatar.

But for now, he can offer a few sage words of advice for Kuol, 18, who is poised to make his international debut on Sunday in Auckland against New Zealand as part of a highly experimental Socceroos team and is on the cusp of signing a lucrative deal with Newcastle United, the rising English Premier League power backed by Saudi petro dollars – one of a number of European clubs interested in signing him.

“It’s very important for him to take the next step in the correct direction,” Arzani said.

“The people around him that are advising him, hopefully will help him do that – his manager, the coaching staff and that around him. My situation was a little bit different: I was already signed to Melbourne City [who are owned by Manchester City], I had a year left on my deal, and I was kind of forced to go … not that I was forced, but I didn’t really have a choice. 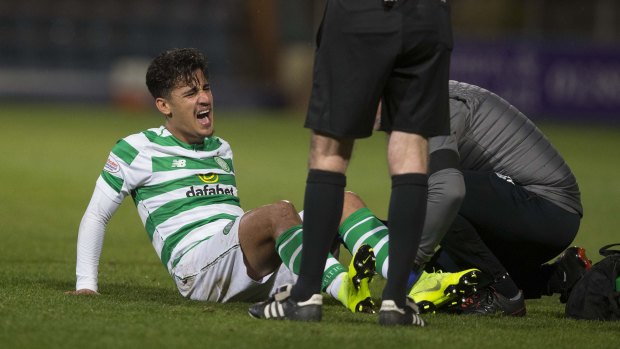 Daniel Arzani hurt his ACL on debut with Celtic while on loan from Manchester City, and his career has been in a tailspin ever since.Credit:PA

“For him, I just think do as much research as you can and look into playing opportunities wherever you’re going to go. That’s the most important thing for young players – to get minutes.”

Kuol is likely to be loaned out – sources say to a club in Portgual – once he signs for Newcastle, as he does not qualify for a UK work permit. There, Arzani says, is the rub: a team with temporary custody of a talented young player has no interest in their future beyond their short-term arrangement, and no incentive to develop them because they do not own their contract and therefore won’t see a dollar in profit on the transfer market when eventually sold.

“They’re not paying your salary, they don’t really have that much to gain if you play well, so for them they don’t really care – unless you go in there day one and you’re incredible,” Arzani said. “For them, it’s not that big of a deal [if you fail]. It’s just important to make the right decision, where you’re going to go. I made a couple of bad decisions with clubs that I went to … it’s always difficult when you’re just going out on six-month loans here and there; it’s difficult to get a spot in the team and to really feel wanted there.”

Kuol clearly has the talent to make it big, but talent isn’t enough. The question is whether he has the discipline, mentality and can find the ideal environment to fully maximise it, and cut through the hurricane of hype swirling around him.

“I haven’t seen him play, but I’ve heard a lot about him over the week or two, with the link,” said New Zealand striker Chris Wood, who plays for Newcastle. “I’m sure he’s a very exciting talent if a club like us are looking at him, especially with where the club’s going to go in the next few years.”

As for Arzani, who was on standby for the Socceroos this week and is expected to be part of the broader squad Graham Arnold will submit to FIFA before picking his final 26-man selection for the World Cup, the tricky winger is hopeful his best days are ahead of him.

“I haven’t spoken to him, but I know that he’s just had a chat with the gaffer [Macarthur coach Dwight Yorke],” he said. “If I can prove enough until the time that he picks a squad, then I think I’ll be in. I can only do what’s in my control, and that’s just to put in 100 per cent every day, try to play as well as I can and show what I can do.”