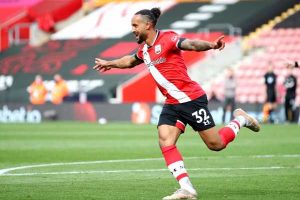 Theo Walcott has agreed to join Southampton on a permanent transfer from Everton after a successful loan spell with his boyhood club.

Walcott returned to Southampton in January on loan, 15 years after his sensational move from Saints to Arsenal as a teenager, where he has established himself in Ralph Hasenhuttl’s team, and he will now commit to a two-year contract once his current deal at Everton expires in June.

“I’m not sure I can properly express how happy I am about this,” Walcott said. “Southampton is a club that means so much to me, and it has been incredibly special for me to have spent this season back at St Mary’s. But to now have the opportunity to return for a further two years means such a great deal to me, both personally and professionally.

“I would like to say a huge thank you to the club, my teammates and the fans for making me feel so welcome back here, and I can’t wait to continue pulling on the shirt in the next couple of seasons. Hopefully in that time we can make a few more special memories too. I would also like to say thank you to everyone at Everton, who have been so good to me throughout my time with the club, and I wish them every success in the future.”

Walcott joined Everton in 2018 after more than a decade at Arsenal, and he featured regularly in his first full season in 2018-19 under manager Marco Silva. However, the 32-year-old struggled to earn a place in the side under Carlo Ancelotti, who recruited Colombian international James Rodriguez last summer.

Ralph Hasenhuttl said Walcott has shown “great commitment” since joining Saints on loan. “Theo has been a very good influence for us this season,” the Austrian manager said. “He is a very professional player who does things in the right way and has a very positive impact not only on our young players but on the dressing room as a whole.

“He understands the way we want to play, he has shown great commitment and he has also shown how he can be an important part of our game. I think he is a player who can continue to help us in these next two years, so I am pleased that he has agreed to stay with us.”

Walcott joined Southampton aged 11 as a prodigious goalscorer, and was signed to a Nike sponsorship deal aged 14. He made his professional debut aged 16 and 143 days against Wolves in the Championship, and scored on his full debut against Leeds soon afterwards. He joined Arsenal for £9m in January 2006, winning two FA Cups in his time with the club. He has 47 England caps, and eight goals.