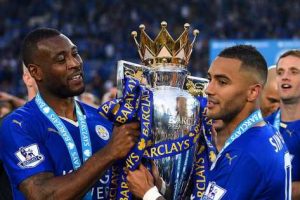 The Premier League is considered by many as the best league in the world, and players from all across the globe make their way over to England in the hopes of playing at the highest level.

Only seven different clubs have won the English top-flight since the first division became the Premier League in 1992, making it an even more prestigious award.

Of course, to win the league you have to be the best, and some of the greats have lifted the famous trophy on a number of occasions, but there are also some stars that aren't so lucky, with Steven Gerrard and Gianfranco Zola finishing their careers without a Premier League title.

In contrast, there are some players that have managed to earn themselves a Premier League winners medal despite not being considered as a great player, rubbing further salt into the wound of those that have painfully missed out.

Here Daily Star Sport takes a look at the eight worst players to win a Premier League medal during their career.

Danny Simpson started his career at Manchester United, but barely got a kick as his four-year professional stint was dominated by a series of loan spells.

A move to Newcastle finally got his career on track, and the defender found himself at a struggling Leicester side in 2014, with relegation narrowly avoided that season.

Leicester shocked the world and won the league the following year, and Simpson was an integral part of their side, as Christian Fuchs operated the other full-back role, but after the unlikely success his career was never the same.

Simpson now plays for Bristol City in the Championship, although he has only managed four league appearances so far this season.

Alexander Buttner was snapped up by Manchester United in 2012 after it initially looked as though Southampton were going to land the young defender, who had impressed at Dutch side Vitesse.

Buttner arrived with a lot of promise, but failed to compete with the level of Patrice Evra who was United's first choice under Sir Alex Ferguson.

During what is still United's last title success, Buttner only made five appearances which usually isn't enough to warrant a winners medal, but a change in league regulations handed the defender with an unlikely honour.

Buttner then joined Dynamo Moscow in 2014, ending a disastrous spell at United.

Ritchie De Laet became a very capable lower league defender following loan spells away from United at youth level, and the Belgian helped Leicester back to the Premier League after signing in 2012.

The defender failed to lay down a consistent role in the top-flight, and was loaned out by the club during their unlikely title winning season.

Leicester won the league against all the odds, and due to his involvement before being loaned out, De Laet earned himself a winners medal, and also gained promotion with Middlesbrough while on loan in the same season.

De Laet's career slowly declined as he moved to Austria for first-team football before making a return to Belgium to play for Antwerp.

Costel Pantilimon joined Manchester City on loan from Politehnica Timisoara during their first ever Premier League title-winning season, and although he didn't feature in the league, they still made the move permanent.

The giant goalkeeper spent a further two years at City, and was a useful asset as he started during their League Cup final win against Sunderland, and also made seven appearances in the league during the 2013/14 season.

Seven appearances was enough to earn the Romanian shot-stopper a winners medal, and the keeper actually joined Sunderland the following season just months after denying them silverware.

Pantilimon enjoyed his best years at Sunderland until 2016, but a move to Watford started his downfall, and the Romanian is now a free agent.

Robert Slater became the first Australian to ever win the Premier League during Blackburn's one and only success during the 1994/95 season.

However, that's probably the only tag that Slater will be remembered for, as Blackburn had Alan Shearer to thank for an excellent season, where the Australian midfielder featured 18 times, and left at the end of the title winning campaign.

Slater was signed after he spent four years at French side Lens, and West Ham, Southampton and Wolverhampton Wanderers all took a chance on him after his stint at Blackburn.

The moves were unsuccessful though, and Slater ended his career back in Australia with Northern Spirit.

Igors Stepanovs attracted some interest from European sides in the 90s after the Latvian defender performed well against the likes of Inter Milan and Barcelona with Skonto Riga.

Injury to Arsenal captain Tony Adams forced Arsene Wenger into the transfer market, and the Frenchman took a punt on the Latvian, although it was very poorly assessed.

Unsurprisingly, Stepanovs didn't provide much competition for Sol Campbell and Martin Keown, but did register enough appearances to pick up a winners medal as Arsenal did the double in 2002.

Despite his lack of ability, the Latvian still managed four seasons at Arsenal, making just 17 league appearances during that time.

Ronnie Wallwork was a bright talent at United, and although he failed to break into the first team, he did pick up a Premier League medal during his time at Old Trafford.

It was issues off the pitch that disrupted Wallwork's career, and the midfielder was even banned for life from playing football during a loan spell in Belgium after he attacked a referee, but his punishment was then reduced.

West Brom signed him in 2002 but the narrative was the same, and Wallwork was constantly in trouble during any loan spells away from the Hawthorns, and he became injured after being stabbed in a nightclub at Barnsley after a fight broke out.

His problems continued in 2011 when he had been without a club for three years, as he was sentenced to prison for 15 months after pleading guilty to receiving stolen cars.

His issues continue now even past his playing career, as in March 2021 he received an 18-month suspended sentence and was ordered to complete 200 hours of unpaid work after pleading guilty to inflicting grievous bodily harm..

Jeremie Aliadiere was signed by Arsenal in 2001 and was touted as a huge prospect by Arsenal boss Arsene Wenger, who looked to repeat his magic of developing French stars.

However, Aliadiere never reached his potential and instead suffered an underwhelming career, although he did pick up a winners medal during perhaps the best Premier League title win of all, Arsenal's invincible year.

Across his six seasons at Arsenal the Frenchman only managed one league goal, but due to racking up 10 appearances during the 2003/04 season he picked up one of the few unbeaten winners medals that have ever been given out.

Aliadiere found some success when he left Arsenal, scoring regularly at Middlesbrough before finding his feet back in France with Lorient, but his career is situated on what might have been.