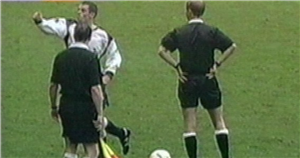 It was wet and it was certainly wild at Highbury when Arsenal welcomed Liverpool for an FA Cup fourth round tie back in January 2002.

To this day, the game lives long in the memory of both sets of fans — but for Jamie Carragher, it represents a day he would most likely prefer to erase.

The Gunners had been reeling from their defeat to the Merseyside outfit in the 2000-01 FA Cup final only nine months prior to this meeting and it showed.

Arsene Wenger’s men looked fired up for battle and took an early lead through Dennis Bergkamp in the first half.

But the clash descended into chaos in the second half in the midst of a stormy north London afternoon, with robust challenges as frequent as the heavy raindrops on the slick surface.

It was one of those fixture where every tackle prompted a wince from the managers and spectators, expecting there to be an angry reaction or challenge that could spark a brawl.

Martin Keown had already been dismissed for a professional foul after hauling down Michael Owen when the striker was clear through on goal and that cranked up the tension in north London.

There were bitty fouls, scrappy passages of play and a raucous sold-out crowd inside Highbury, Arsenal’s former home, ready to join the battle.

But it didn’t truly ignite until the second half.

That was when the goalscorer Bergkamp left his boot in on Carragher with a late challenge and after a few seconds of consulting with his assistant, referee Mike Riley showed the Dutchman a straight red card.

HAVE YOUR SAY: Will Liverpool overcome in-form Arsenal on Saturday at Anfield? Comment with your score predictions below.

The Arsenal forward was left incensed by the decision and, with Highbury a lot more intimate than other grounds, the fans’ reaction behind was clear to see. The noise and furore had increased.

It would only take one person to let their emotions overflow and unsurprisingly, it came from the crowd. A supporter from the home section lashed out by throwing a coin at Carragher, seemingly for his role in getting Bergkamp sent off.

And just like how Patrice Evra and Eric Cantona disgraced their careers with a moment of madness by retaliating, Carragher lost control.

The Englishman picked up the coin that he had been pelted with and launched it back in the direction of the disgruntled Arsenal fan, prompting a furious reaction from the crowd.

The incident was swiftly spotted by the officials and Carragher ensured he would be joining Bergkamp in walking down the tunnel for an early bath. Perhaps there was unfinished business between the pair after their encounter on the pitch.

For obvious reasons, Carragher was forced to apologise for his part in the extraordinary incident. The Liverpool defender made no attempts to excuse his behaviour, making a grovelling apology to his club and the supporters after the match.

"I regret what happened at Highbury because I let the club, the fans, my team-mates and myself down,” Carragher said.

“No matter what the physical or verbal provocation, I shouldn’t have reacted like that I would like to apologise for any offence caused.

“I was frustrated and did it without thinking in the heat of the moment. Anyone who has seen me play regularly will realise it was completely out of character but I’m not going to make excuses.

"I was wrong and as a professional football player I should have known better. It’s a mistake I won’t make again.”

But he also cost his team in this FA Cup tie. With Keown and Bergkamp sent off, Liverpool would have enjoyed a two-man advantage. Instead, with Carragher sent off, they stuttered to a 1-0 defeat to end their cup run.

Then-manager Phil Thompson was left furious at the lack of composure shown by one of his side’s leaders, insisting that “two wrongs don’t make a right”.

"He was angry and frustrated about getting hit by something, and what he did was out of character, but that still doesn't make it right,” he said.

"Jamie had responsibilities to his team-mates. Arsenal had just had two players sent off, so there is a need for calm heads. Whether or not Jamie is disciplined by the club is a private matter.”

The matter could have had serious consequences for Carragher, with the fan — who was hit by the coin — making an official complaint to the police. He was later handed a warning and escaped further punishment from the Football Association.

But there is no question the incident showed an ugly side to Carragher’s passionate persona when the red mist descended. Considering he was only 24 at the time, it was a mistake he could learn from and later in his career, incidents of this kind were fewer and far between.

Indeed, Carragher maintains his spot in Liverpool folklore at Anfield, having made 737 appearances for the Reds — placing him in second on the club’s all-time appearances list,

These days, the Liverpool legend is known for his work on Sky Sports, featuring prominently on Monday Night Football alongside Gary Neville, as well as CBS Sports’ Champions League coverage.

Aside from the odd heated debate with his former foe Neville, the 43-year-old is a much calmer character now and provides a measured view of football from the pundit’s chair.

But nearly 20 years on from that game, Liverpool host Arsenal at Anfield on Saturday evening and the prospect of an intriguing encounter lies in waiting if past fixtures are anything to go by.

These games are much more civilised these days with tacticians Jurgen Klopp and Mikel Arteta on the touchline and the modern game perhaps less physical than ever before.

Carragher will surely keep his cool as well — so long as he doesn't bump into Bergkamp again.