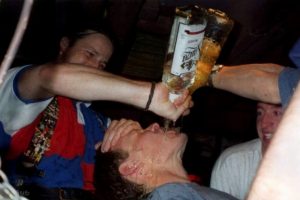 Euro 96 was a special tournament for England for a number of reasons, not least of which because it’s where the Three Lions achieved their joint-best finish at a European Championship.

The hosts encountered criticism after the infamous ‘dentist chair’ photos emerged from a pre-tournament trip to Hong Kong—but Teddy Sheringham has suggested those snaps may have worked in the team’s favour.

Incumbent manager Gareth Southgate was part of the squad that travelled to Asia in the lead-up to a major international tournament on home soil.

However, their preparations weren’t as professional as many might have hoped, with pictures depicting players in torn shirts, taking turns in the chair guzzling spirits en masse.

It didn’t appear to hamper their performances as England finished third, losing in the semi-finals to eventual champions Germany via a penalty shootout.

Sheringham told The Sun that while the pictures may not have reflected well on the squad a month before the tournament got underway, he has only fond memories of that evening: “It was a great night out, yes. Great fun.

“I mean, you’re with 20 of your mates. You know you have four weeks of staying in and are allowed this one night out.

“It’s not great pictures, I know, how it turned out. But you know you want to enjoy yourself for that one night — and we certainly did.”

How far do you think England will go at Euro 2020? Let us know in the infamous ‘dentist chair’ photos

Paul Gascoigne was considered the ring leader behind the festivities in Hong Kong, but Sheringham’s face was also prominent on the back pages at the time.

Southgate is preparing to lead England into Euro 2020 a quarter of a century later, with the Three Lions poised to open their group campaign against Croatia on Sunday.

Needless to say today’s modern professionals can’t afford to be caught getting up to similar antics, but Sheringham lauded the response of then-England manager Terry Venabales.

Far from throwing any of his players under the bus, Sheringham said the boss attempted to shield his squad from media scrutiny: “We know it didn’t look very good to the public and Terry wasn’t best pleased about it and he let us know in no uncertain terms. But what he did afterwards with the Press was pure genius.

“He said, ‘Look, I allowed them out; it’s on my shoulders.’ And he protected the players. He defended us and we loved him for it.”

England repaid their coach with an unbeaten run through the group stage at Euro 96, beating Spain on penalties in the quarter-finals before bowing out to Germany in the same circumstances.

Former Manchester United and Tottenham forward Sheringham scored twice in a 4-1 win over the Netherlands to help seal a first-place finish in their group.

Rather than divide the players, the 55-year-old looked back on the dentist chair debacle as a bonding experience of sorts: “I think that is exactly how it brought us together. When you’re in each other’s company, you get to know people.

“And then when someone defends you like (Terry did), it gives you a sturdiness in your group and a unity that perhaps you wouldn’t have got if we had stayed at home and stayed at (team hotel in England) Burnham Beeches and all been on a quiet front.”

Southgate’s side will once again have the benefit of home advantage this summer as they play each of their Group D games at Wembley.

The Three Lions have won six straight games ahead of the competition, clinching 1-0 friendly wins over Austria and Romania in the past week.

Sheringham predicted former team-mate Southgate will “take a lot from what Terry did in Euro 96” as he looks to bring a maiden European crown back to England this summer.