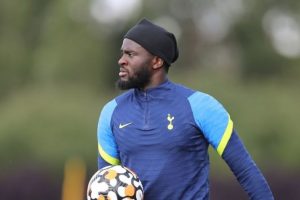 Tanguy Ndombele has been left out of the Tottenham squad for their Europa Conference League tie against Pacos Ferreira. It is the latest hint that the midfielder could leave before the end of the transfer window.

Spurs face the Portuguese side across two play-off legs in the inaugural European competition.

Boss Nuno Espirito Santo has had to name a 25-man squad for the tie, which will see Spurs travel to the Primeira Liga side on Thursday before hosting them on August 26.

The 47-year-old has named a strong list of senior players, batting away suggestions that he would only use his fringe players in the tournament.

Harry Kane has been included, despite being omitted from Spurs’ squad for their 1-0 win over Manchester City on Sunday.

JUST IN: Premier League winners and losers: Fernandes shines as Kane is absent

However, Frenchman Ndombele is one of a few notable absentees. Right-back Serge Aurier is another.

The 24-year-old has been strongly linked with a move away from the Tottenham Hotspur Stadium since being left out of the squad for their north London Derby friendly versus Arsenal earlier this month.

Nuno’s latest snub of the player will further intensify speculation that the club’s record signing could leave.

Ndombele was signed from Lyon in a huge £55million deal two years ago but has struggled to settle in at Spurs.

He featured sporadically under Jose Mourinho in his first season, starting just 12 Premier League matches under the Portuguese.

Last season was a more successful one. There were 33 league appearances, including 28 starts, and a couple of stunning moments.

A fantastic lob against Sheffield United in January prompted suggestions that Ndombele had finally navigated his way into Mourinho’s plans.

But he then suffered his latest setback when several academy prospects were selected ahead of him for the Spurs team to face rivals Arsenal in pre-season.

Nuno did not name Ndombele on the bench for the club’s opening Premier League fixture against Man City. Spurs won 1-0 thanks to Son Heung-min’s goal.

Meanwhile, a notable name included in the Conference League squad is striker Kane.

The 28-year-old did not feature in the victory over City having only just returned to the club’s Enfield training centre on Thursday.

Kane is a transfer target for City and talks over a move are set to intensify this week. Spurs chairman Daniel Levy is unwilling to sell.

Nuno has urged Kane to be ready for trips to Portugal and then the 47-year-old’s former club Wolves.

“Harry is one of the best players in the world, so we are very lucky to have him,” Nuno told Sky Sports.

“He has to get ready and help the team. We still have to go to Portugal [to play Pacos Ferreira in the European Conference League on Thursday] and then we think about Wolves [on Sunday].

“Harry worked this morning, is preparing himself and when he is ready he will join the group and help the team.”
Source: Read Full Article