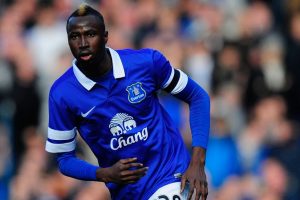 For some reason, there is something strangely comical about seeing football players who tower above their opposition.

Peter Crouch is one of the most well-recognised English players in recent times, and that isn’t due to his spells at Stoke City and Burnley; the 40-year-old is 6ft 7 in and was quite literally head and shoulders above some of his team-mates.

The Dutchman was signed in 2021 from Ajax and is yet to make a first-team appearance for the club.

However, fans have been treated to seeing the 6ft 8 in goalkeeper competing in cup competitions.

But, who are the tallest players in the history of football? Daily Star takes a look…

With pace, power and height on his side, Lacina Traore is a defender's worst nightmare.

Football has taken the 31-year-old all over the world, enjoying spells in the Ivory Coast, Romania, Russia, France and now Turkey.

But Traore will be most well-known for his unsuccessful loan spell at Everton, where he made one appearance before injuring his hamstring and being ruled out until the very last game of the season.

The Ivory Coast international has been known as the ‘Gentle Giant’ and ‘The Big Tree’ by some of his teammates at previous clubs.

Former Manchester City goalkeeper Costel Pantilimon is one of the tallest players in football history, with some reporting that the Romanian shot-stopper is just under 6ft 9in.

The 34-year-old only ever made seven appearances for the Etihad Stadium outfit, though he was able to cement himself as a Premier League icon due to his extended stay in between the sticks at Sunderland.

Former Norwegian striker Tor Hogne Aaroy just about manages to secure his spot in the top five tallest players ever by half an inch.

The forward spent most of his career playing for Norwegian side Aalesund, making 242 appearances for the club and helping them to three promotions.

He then took his ultimate target man style to the J League in Japan, where he spent two seasons playing for JEF United Chiba before returning to Aalesund.

The Premier League was oh so close to another giant joining their ranks in 2006 when Yang Changpeng had a one-month trial at Bolton Wanderers – however, the striker was unable to impress and returned to Wuhan Optics Valley.

But it wasn’t all doom and gloom for the Chinese forward as he did pick up a glorious nickname during that time, ‘The Chinese Peter Crouch’. What an honour.

Changpeng spent most of his career playing in the China League Two, though did enjoy spells in the Chinese Super League too.

The career of a footballing icon came to an end last year when Vanja Ivesa hung up his boots.

At 6ft 9in, the Croatian shot-stopper set records for being the tallest player to ever grace several leagues he played in.

Invesa spent the majority of his career playing in Croatia, but he did enjoy spells in Sydney, Australia, and also in Turkey, where he spent four seasons and made 131 appearances for Eskisehirspor.

Striker Paul Millar spent six years plying his trade in Scotland with Elgin City and Deveronvale before his career was cut short through injury.

But that didn’t stop the 33-year-old from making an impact at his former clubs, namely because all of the door frames had to be heightened so that Millar could squeeze through.

Goalkeeper Kristof van Hout was a giant amongst men.

The 34-year-old plays for Belgian side Westerlo after making the move from Delhi Dynamos in India in 2015.

Van Houten is widely recognised as one of the tallest players ever, often looking like he is playing in a children’s match when barely leaving the floor to collect in-swinging crosses.

The giant has enjoyed spells at Standard Liege and Genk, winning the Belgian Cup with the latter in the 2012/13 campaign.