Home » Soccer » Taking a knee: Football fans across Europe asked about its importance and if they support it

Taking a knee: Football fans across Europe asked about its importance and if they support it 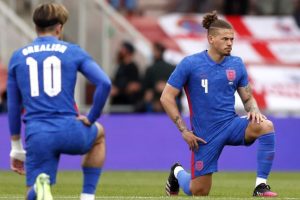 More football fans in Europe – including in England, Scotland and Wales – are supportive of players taking a knee than against it, but they are split over the gesture’s importance in tackling racism, according to a major survey.

Polling company YouGov has shared with Sky Sports News the results of a study of 4,500 football fans carried out across nine countries in March this year, during the football season.

Most nations and groups had more fans who supported players taking a knee, with opposition mostly coming from a vocal minority. 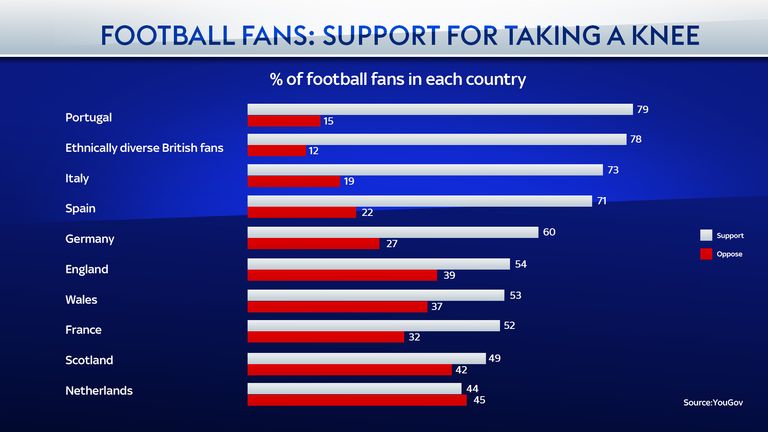 In England, from a survey of 547 football fans, 54 per cent said they support players and staff taking a knee to support the Black Lives Matter movement. Half of these people (27 per cent) said they strongly support it, with the other half somewhat supporting it.

Some 39 per cent of football fans in England said they opposed players taking a knee while seven per cent said they did not know. In the last fortnight, England players faced boos from some of their own fans attending their final two Euro 2020 warm-up games at Middlesbrough’s Riverside Stadium.

YouGov also spoke to a sample of almost 200 ethnically diverse football supporters in Great Britain. Among those fans, 78 per cent said they supported it, 12 per cent did not, with 10 per cent saying they did not know.

There were also high levels of support among fans in some European countries. Portugal had the highest with 79 per cent, followed by Italy (73 per cent) and Spain (71 per cent). Only the Netherlands had less support and more opposition with 44 per cent in favour, and 45 per cent not supporting the move.

Players, officials and staff across the leagues took a knee prior to kick-off at matches when football resumed after Project Restart last summer, although some clubs chose to stop during the season.

The gesture was seen around the world during protests following the murder of George Floyd and the subsequent rise of the Black Lives Matter movement.

The Black Lives Matter slogan was present on Premier League players’ shirts during the restarted 2019-20 season and was later changed to a patch with the words No Room For Racism which was the Premier League’s own anti-racism initiative.

How important is the gesture in tackling racism? 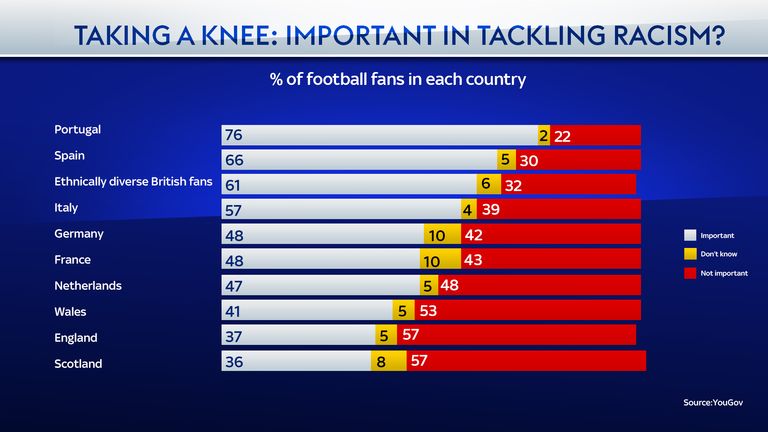 When asked specifically about kneeling, only 37 per cent of football fans in England thought the gesture was important in tackling racism. From this sample, just over a quarter thought it was very important with the remainder viewing it as somewhat important.

However, 57 per cent of football fans in England did not think it was important when it comes to tackling racism, with just over a third (34 per cent) thinking it is not important at all.

In Scotland, 36 per cent of fans thought it was important, while 57 per cent did not – the same percentage as fans in England. In Wales, views were a little more evenly split with 41 per cent deeming it important, and 53 per cent thinking it was not.

The results were different when looking at football fans from ethnically diverse backgrounds in Great Britain. 61 per cent felt it was important. However, almost a third (32 per cent) did not think it was important in tackling racism.

A larger percentage of fans in the European countries felt taking a knee was important to tackle racism. The highest figure came in Portugal with 76 per cent, with 66 per cent in Spain and 54 per cent of fans in Italy sharing the same view.

48 per cent of football fans in Germany and France thought it was important which was a higher proportion than the home nations. 42 per cent disagreed in Germany, while the figure was 43 per cent in France.

Why do players take a knee?

Football fans across Europe tend to be familiar with the sentiment behind taking a knee, but nowhere more so than the home nations. This also included 88 per cent of football fans in Britain from an ethnically diverse background.

Among individual countries, 92 per cent of fans in Wales say they are familiar with the reasons behind taking a knee, more than any other European country. This is followed by 90 per cent in England and 88 per cent of supporters in Scotland.

Taking a knee became widely known in sport when NFL quarterback Colin Kaepernick used it during the national anthem in 2016 to protest police brutality and racial inequality.

It became widely adopted in sport, and politicians, protesters and police have taken a knee across the world to show their commitment to tackle racial inequality.

Aston Villa and England defender Tyrone Mings believes taking a knee, particularly in England’s top-flight, has been central to keeping wider conversations about racism on the agenda.

“The Premier League is supporting it and that allows other doors and other conversations to be open and to be a little more free-flowing,” Mings told Sky Sports News last month.

“I think if we had taken a knee for one game last year and then stopped, I’m not sure we would have seen anywhere near the amount of conversations we’ve seen around online abuse, around racism, and around discrimination in any form in the last 12 months.

“I think it would be another ‘wear a t-shirt for a weekend’ and then wait for that same day the following year. I don’t think it would have gained any momentum if we hadn’t continued to take the knee.

“I think [sometimes] the people who are frustrated by it see it as just a gesture we do before a game and perhaps don’t grasp how and how influential we can be with the actions that we take.”

Newly-promoted Brentford stopped taking a knee last season as they believed the gesture was “no longer having an impact.” Championship side QPR’s director of football Les Ferdinand said the message behind the gesture had been lost when he defended his team’s decision to stop kneeling in September.

Virtually all Premier League players took a knee last season, with Crystal Palace forward Wilfried Zaha becoming a notable exception when became the first player to refrain from the gesture and stand. It came before kick-off in Crystal Palace’s 1-0 win over West Brom in March. He continued to stand for the rest of the season while all other players in England’s top division continued to kneel.

Speaking in February, Zaha said it was “degrading” and encouraged players to “stand tall” in defiance of racism. After deciding to stand the following month, Zaha released a statement.

“There is no right or wrong decision, but for me personally I feel kneeling has just become a part of the pre-match routine and at the moment it doesn’t matter whether we kneel or stand, some of us still continue to receive abuse,” it read.

“I also fully respect my teammates and players at other clubs who continue to take the knee.”

You can read the full results of the survey on YouGov’s website.

Kick It Out reporting racism