D-day looms next week for Sydney FC star Milos Ninkovic, who is set to make a decision whether to stay with the A-League champions or join the newcomers next season.

It's believed the 34-year-old is leaning towards re-signing over defecting to new franchise Macarthur for the next A-League season. 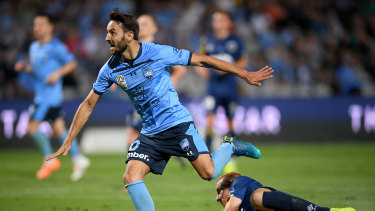 Milos Ninkovic is reportedly leaning towards re-signing with the defending champions.Credit:AAP

A sticking point was reported to be the length of contract on offer from Macarthur, who provided a multi-year deal and more security for the Serbian, who will turn 35 on Christmas Day.

However, following the Sky Blues' 1-0 defeat of Central Coast on Saturday night, coach Steve Corica reiterated Ninkovic's importance to the team and said the club hoped to keep him for a few more seasons.

"Of course Ninko is a quality player and we want to keep him for as long as possible," he said.

"We want to keep him, for a couple of years if we can."

Ninkovic was taken from the field at Netstrata Jubilee Stadium with a tight calf, but is not believed to be in any doubt for next week's match against Wellington.

Corica said the Sky Blues, who are now eight points clear of second-placed Melbourne City on the A-League ladder, are not getting ahead of themselves too early despite six consecutive wins.

With a top-of-the-table match on the horizon in round 12, followed by Adelaide United in round 13, they could draw further ahead of the pack over the next few weeks.

"We want to win that match [against Melbourne City] as well because they're not too far behind us and it would help to pick up the three points against them," Corica said.

"We have a very important win next week in Wellington, they're doing really well, three wins and a draw, so we'll concentrate on that game first and worry about the other game after."