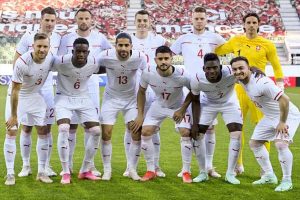 Vladimir Petković leads a Swiss side that possesses plenty of talent in their quest to break through and win a knock-out match to finally clinch a quarter-final berth.

Last time out at Euro 2016, they emerged unbeaten from the group stage behind France but exited in the round of 16 on penalties to Poland.

While the Swiss left France without a defeat in regular time, their sole victory only doubled their total in 13 European Championship games.

Their only other win came in 2008 on home soil against an already-qualified Portugal in one of three group stage exits in their other appearances at this competition.

There could therefore be some pressure on Petković, who was appointed in 2014, to push for victories during the group stage, while he will hope the next generation of Swiss talent can assist the veteran presence of Xherdan Shaqiri and Granti Xhaka, both of whom are approaching a century of caps for their country.

Their back three/five should provide them with a good opportunity to advance though, particularly with the chance to qualify for the round of 16 as one of the best third-place finishers.

Though Petković still lacks a top class striker, with Breel Embolo, 24, yet to fulfil his exceptional potential, which will likely see Shaqiri shoulder the burden in the final third once more.

Jurgen Klopp has used the Swiss talisman sparingly this season, which could play into Petković’s hands if he is able to find a spark in the warm-up games.

Petković is therefore likely to turn towards less conventional ways to hurt opponents, with his tactical set-up allowing the likes of Kevin Mbabu to push forward with intent from wing-back.

While the midfield can be freshened up at times should the game script not prove favourable with the experienced Xhaka and Remo Freuler, as Gladbach pair Djibril Sow and Denis Zakaria provide more interesting options.

The group is closely-matched between the Swiss, Turkey and even Wales, who will likely prove resilient and keen to mix it with both sides in the battle to join Italy in the knock-out stages.

The leader of this Swiss side at the heart of their midfield, Xhaka thrives for his country where he has sometimes been lacking for the Gunners. His tidy distribution will be useful for the Swiss, though his leadership is still his biggest asset to his country, who will sense this is the final opportunity at a tournament for what could be described as a golden generation.

A rampaging right-back who will be keen to insert his influence on the game with his elite athleticism. Likened to Kyle Walker, Vladimir Petković will look to Mbabu, 26, to provide those forceful runs from deep and impact the final third.

Switzerland: The Swiss have some really good experience and players approaching their prime, while also possessing tournament experience. I expect Vladimir Petković’s side to edge out Turkey for second place in the group, though they may ultimately fail to progress much further without an elite match-winner.