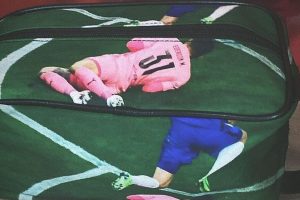 Swindon Town's resident wind-up merchant Harry McKirdy is up to his old tricks again as he prepares to face Manchester City.

McKirby, who is a Chelsea fan, took to Instagram to show off his boot bag for their FA Cup clash on Friday evening with the caption: "Game day."

However, it wasn't an ordinary boot bag, and the bag showed Kai Havertz's Champions League winner against Manchester City on its exterior.

Havertz's goal split the two sides in Porto in May, and gifted Chelsea their second Champions League triumph while denying City their first.

And McKirdy will be hoping his cheeky dig will get under the skin of some of City's stars.

McKirdy has something of a history of winding up the opposition.

He went viral late last year after firing a cheeky dig at Newport County defender Kevin Ellison, who called the striker a “gob*****” on Instagram, after McKirdy called him ‘Voldemort’.

While an opposition supporter in the disability section of Northampton Town’s away fans tried to run him over.

The fan became so infuriated by the 24-year-old’s constant celebrations in front of him, he appeared to try and burst through the advertising boarding.

What do you think of the bootbag? Let us know in the comments section

Swindon drew Manchester out of the hat for the third of the FA Cup.

"It's going to be a big job for everyone at the club, but it's a really nice problem to have!

"It's a cracking draw. As a supporter too, it's brilliant to have one of the best teams in the world playing at the County Ground.