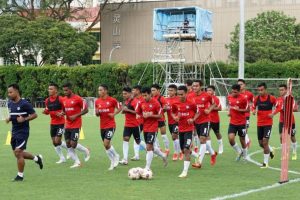 SINGAPORE – Despite entering the Suzuki Cup on a six-match winless streak, Singapore coach Tatsuma Yoshida remains bullish ahead of their opener against Myanmar at the National Stadium on Sunday (Dec 5).

The 47-year-old Japanese told The Straits Times: “We can revive the winning feeling.”

He knows the first step to achieving that is beating a Myanmar side beset by political woes back home and bereft of key players like goalkeeper Kyaw Zin Htet and attackers Kyaw Ko Ko and Aung Thu. The trio declined to join the team as a protest against the military coup in February.

History is also on the hosts’ side, with four-time champions Singapore boasting a perfect five-win record over their rivals in this competition, while Myanmar have lost all their five international matches this year by an aggregate score of 28-3.

While Yoshida should start with the established spine of Safuwan Baharudin, Irfan Fandi, Hariss Harun and Ikhsan Fandi, the coach was coy about his starting line-up.

He was, however, clear that before their showdown against five-time winners Thailand on Dec 18, he is looking for maximum points against the Philippines (Dec 8) and Timor-Leste (Dec 14) to meet his preliminary target of making the semi-finals.

Yoshida said: “Of course, we want to be champions, but we have to take things one step at a time. This means getting a good start against Myanmar, who will be highly motivated because of their issues. I don’t even need to tell the boys this is a must-win for us, they understand that.

“There will be unpredictability because we haven’t been able to see this current Myanmar and Philippines squad play together. But we have a balanced team in terms of age, position and experience, our preparations are done and we are ready to go.

“We know (defending champions) Vietnam and Thailand are on a different level in Asean. We respect that but we are not so far away and it is possible to beat them. We are not the favourites, but we are worthy challengers.”

Since taking the reins in May 2019, his tenure has been a mixed bag as the Lions played 15 higher-ranked opponents and emerged with three wins and three draws.

While the Lions initially played positive, entertaining football, managing to beat Palestine and Yemen in World Cup qualifiers, their progress was halted when the pandemic struck.

When the world of sport resumed after lockdowns worldwide, the Lions were a pale shadow of themselves, losing three World Cup qualifiers by a total of 12-0 in Saudi Arabia in June. In November, they looked like they still had not woken from their slumber, losing 2-1 to Kyrgyzstan and 7-1 to a Morocco ‘A’ team during a training camp in Dubai.

But Yoshida begged to differ, and said: “Football is a matter of habit, routine is very important to build a strong team, and we were deprived of that by Covid-19, so June was a difficult time for us.

“But in the past month, the mood and performance in the team have been the best since I joined. Our fitness and intensity levels have become much better, and we are showing better teamwork, which is most important for the tournament.

“As for the friendlies, we could have played and beaten lower-ranked teams, but that would be meaningless.”

He also hit back at critics who felt that his tactics have been too one-dimensional when the chips are down, which led to Singapore managing to come from behind just twice to win or draw.

Yoshida, who often deploys a 4-3-3 but has also experimented with a back three, said: “I want the boys to play aggressive, high-intensity and attacking football, but it depends on the situation and who we are facing. We have different plans, systems and modes.

“I understand how important the Suzuki Cup is for Singapore fans. We want to do well on home soil for them and hope they will continue to support us.”