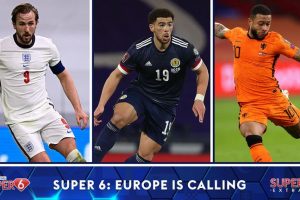 Super 6 is back for the Euros and we’re serving up some priceless pointers to help get you closer to that £100,000 jackpot.

The big summer tournament kicks off on Thursday and Super 6 returns with three rounds across the group stages – featuring the all-new ‘Rollover”.

The jackpot will be £100,000 for the first round and will increase by that exact amount if the jackpot is not won. That means by round three, there could be an inviting £300,000 up for grabs.

Need some pointers? From key payers to the record books, the Super 6 team has come up with some choice statistics to help you with your selections.

Kieran Trippier’s free-kick, Harry Kane’s proposed square-pass to Raheem Sterling, you remember that right? Ultimately, Croatia had the last laugh, running out 2-1 winners and booking their place with France in the World Cup final of 2018 in doing so.

England find themselves ranked fourth in the world heading into the Euros, while their foes from 2018 are sitting in 14th. This will be a tight and tense affair to kick off proceedings in Group D. 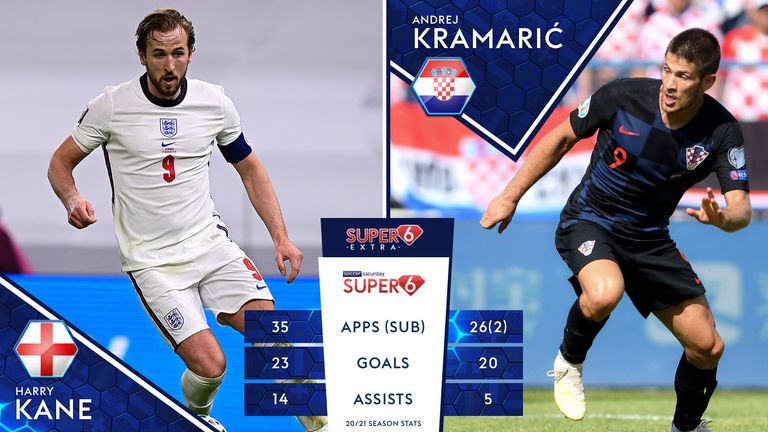 What a season for the England captain. Just the small matter of 37 goal contributions in 35 Premier League starts. His 23 goals, with one against Leicester on the final day, was enough to land him his third Golden Boot but 14 assists earned him the Playmaker award too. What will he produce at the Euros?

Hoffenheim finished 11th in the Bundesliga, but that did not stop Andrej Kramaric from scoring a hatful of goals once more. The Croatian frontman scored 20 and created five during 28 appearances. Could he find the net against England as he did last time?

England staged a dramatic late comeback to seal a place in the finals of the inaugural UEFA Nations League. Kramaric had opened the scoring, before goals from Jesse Lingard and Kane in the space of seven minutes ensured a 2-1 win for the Three Lions.

Austria did reach the Euro 2016 campaign but went out at the group stage. There is far more jubilation for North Macedonia, who have reached their first major tournament in their 27-year history. 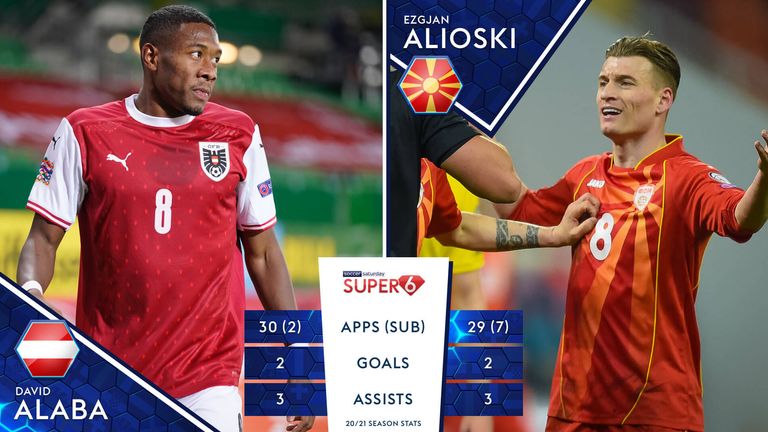 Another title-winning domestic campaign for David Alaba was the perfect send-off at Bayern Munich. Alaba has now signed a five-year contract with Real Madrid.

A healthy 29 starts for Ezgjan Alioski with Leeds United, scoring two goals and claiming three assists, was not a bad return. Going forward, he will be a threat for North Macedonia and provided their only assist in their recent 1-1 draw with Slovenia.

Austria ran out 2-1 winners in front of a 41,100 attendance during 2019. The goals came from David Alaba and Stefan Lainer. Both of these countries were in the same qualifying group for the Euros too, with North Macedonia advancing to the play-offs through the Nations League.

The Netherlands failed to qualify for their last two major tournaments, being Euro 2016 and the 2018 World Cup, while Ukraine finished rock bottom of their group at Euro 2016, failing to score a single goal. 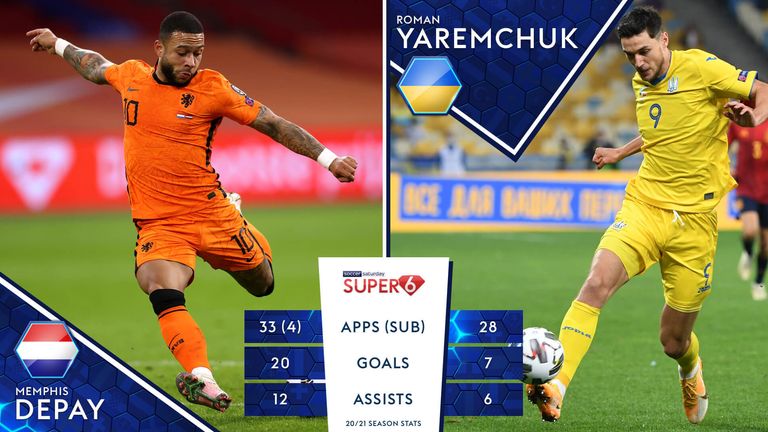 It has been another season where Memphis Depay has exceeded expectations, notching 20 goals and creating 12 for Lyon from only 33 starts. He has scored doubles in his last two Netherlands appearances too, firing past Gibraltar and Scotland.

Roman Yaremchuk has contributed to 23 goals (17G, 6A) from his 28 starts for Gent this campaign, while finding the net with Ukraine’s only goal in their last competitive international in March against Kazakhstan.

It has been a long time coming! These two last collided in 2010, where they played out a 1-1 draw in a friendly encounter. Michel Vorm and Andriy Shevchenko were among the starters for both countries.

Scotland qualified for a first major tournament in 22 years after the heroics of David Marshall in the Serbian capital of Belgrade. Czech Republic were another team who went out at the group stage during the Euro 2016 tournament but will be looking to make a splash. Che Adams will undoubtedly be a big boost for a Scotland squad that has lacked goals on many an occasion in previous years. Adams netted nine goals for Southampton during the Premier League season, creating five for his team-mates.

Tomas Soucek has been a revelation of a signing and one of the signings of the season for West Ham. The midfielder was a master of arriving late in the box and scoring from headed goals, racking up double figures over the course of the campaign, not to mention his hat-trick for Czech Republic at Estonia in March.

Ryan Fraser grabbed the winner and only goal after six minutes as Scotland earned a second successive win over Czech Republic in a matter of months towards the end of 2020. Scotland are unbeaten in their last four against Czech Republic.

Poland were knocked out at the quarter-final stage of Euro 2016 at the hands of eventual winners Portugal, through penalties of all scenarios. Slovakia made it out of the group stage too, losing to Germany 3-0 in the round of 16 during the last Euros. 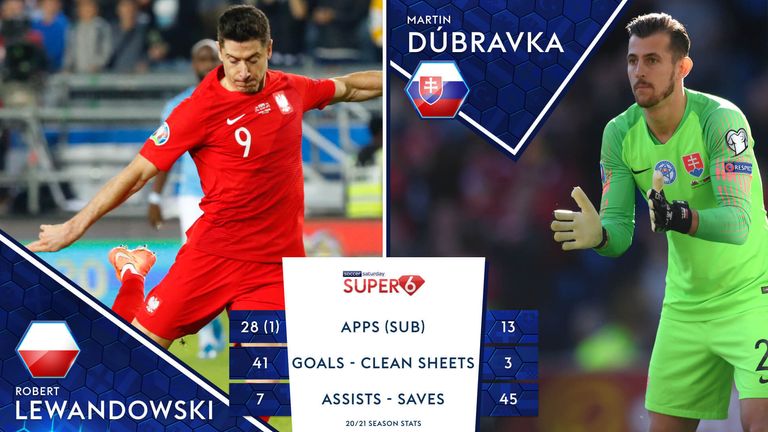 What more can be said about Robert Lewandowski? The Polish striker broke the Bundesliga goalscoring record after hitting home 41 goals in just 29 appearances. This broke a record held by Gerd Muller, which stood for 49 years.

A man who will be attempting to keep Lewandowski (relatively) quiet will be Martin Dubravka. He had a fantastic end to the season with Newcastle, starting his last 13 matches and keeping three clean sheets to ensure a strong 12th-placed finish, averaging just under 3.5 saves per game.

Poland and Slovakia’s last meeting was in 2013, with Slovakia coming away from Poland with a 2-0 win. Robert Mak doubled the visitors’ lead, a player who has made the Euro 2020 squad.

Spain were dispatched 2-0 by Italy in the round of 16 of the last Euros, while Sweden did not make it out of the group stage. Saying that, they reached the quarter-final in the 2018 World Cup, where they were put out by England. Real Sociedad finished fifth in La Liga this season, largely down to their attacking returns. Mikel Oyarzabal contributed to just under a third of Sociedad’s goals, scoring 11 times and tallying eight assists during the campaign. Could he start for Spain in their first match against Sweden?

Someone else who can take some credit for Real Sociedad’s campaign is Aleksander Isak. A team-mate of Oyarzabal, the Swedish striker scored 17 goals while creating just two, meaning the two Sociedad attackers could decide the fate of their countries in this one.

Both countries shared the spoils in 2019 during a Group F European Qualifying match, with Marcus Berg opening the scoring and Rodrigo levelling in injury time, a forward who Spain will be without for the Euros.