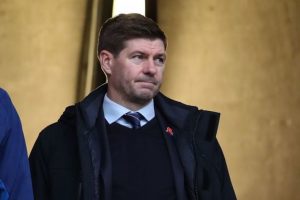 Cristiano Ronaldo trains with Man Utd ahead of Villareal test

Steven Gerrard has followed in Antonio Conte’s footsteps by banning several things from the menu at Aston Villa. Gerrard is supervising an overhaul at the club after leaving Rangers to replace Dean Smith earlier this month, as Conte is doing at Tottenham Hotspur.

The Liverpool icon enjoyed a winning start on Saturday, watching his side beat Brighton & Hove Albion 2-0 at Villa Park.

It ended a run of five straight Premier League defeats as improvements throughout the team were already on show.

Conte also recorded his first league win as Tottenham boss at the weekend, celebrating a comeback 2-1 win over Leeds United on Sunday.

And after the game, the Italian head coach stressed the importance of good nutrition amid reports he had banned ketchup, mayonnaise and fizzy drinks at the training ground.

According to The Telegraph, Gerrard has followed suit as part of a new code of conduct at Villa.

As part of Gerrard’s strict regime, fizzy drinks, sauces, puddings and hot chocolate are no longer permitted at the club’s training ground.

He has introduced the rules for the senior and academy teams to reduce ’empty calories’, and they have been well-received.

Puddings may be allowed 24 hours before matchday as a source of carbohydrates for energy, but the plan is to cut out most ’empty calories’ from foods full of sugars and oils.

Gerrard has confirmed he is setting ‘extremely high standards’ at Villa, as he hopes to turn the club into top-half regulars in the Premier League.

He told reporters: “The facilities at the training ground are elite, and the structures are in place for the team to be successful.

“There’s a lot of ingredients to get into my starting XI, and the players will find that out.

“You’ve got to have the right mentality and go above and beyond basically, strive to be elite and be the best version of yourself.

“We’ll naturally implement our ideas and philosophy the more time we spend on the grass with the players, and we’ll be working hard every day to get to where we want.

“Standards will be extremely high. My staff and I obviously came from Rangers, where we had quite a big rebuilding job.

“We enjoyed success and have certainly left the club in a far better place. Our intention and focus is to replicate that here and we’ll do that by working hard and driving standards.”

Gerrard will hope to make it two wins in two as Villa boss on Saturday’s trip to Crystal Palace.