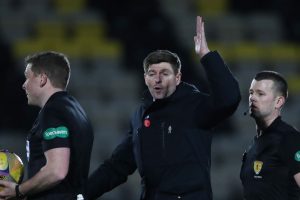 A furious Steven Gerrard was sent off for launching a furious rant at referee John Beaton during Rangers' 1-0 win at Livingston on Wednesday night.

The Light Blues manager marched onto the pitch at half-time to complain after seeing Alfredo Morelos booked for diving despite having clearly been fouled in the box just before the break.

Gerrard's temper earned him two yellow cards as he raged at the official – who dished out seven yellows during a bad-tempered affair: "You were f*****g bang wrong. You're bang out of order."

The matter does not fall under the Scottish Football Association's fast-track procedures so there is no set deadline for Hampden disciplinary chiefs to decide how long a punishment to hand out.

But with Rangers potentially set for a Premiership title party when they head to fierce rivals Celtic on March 21, Gerrard could be forced to watch the celebrations from the stand if his case is decided early.

It was from his second-half perch in Livi's main stand that he lapped up Morelos' 87th-minute winner as the Colombian fired Rangers to within two victories of the title – and Livi sick again just three days on from their Betfred Cup final defeat.

The league race could yet be settled before the derby in any case if Rangers win at home to St Mirren on Saturday and Celtic fail to get a victory away to Dundee United the following day.

Nathan Patterson – who still has a hefty ban looming following his Covid-19 breach – came in to make his first league start after last week's Europa League heroics against Royal Antwerp while Scott Arfield was in from the kick-off for the first time since mid-December.

Livi's plastic pitch certainly did not help the spectacle in the early stages, with the action pin-balling between a series of aimless headers and high, lumped passes.

Filip Helander came close to the opener on the half-hour mark as he met Borna Barisic's out-swinging corner flush, with his header creeping just over the bar.

It had been a rather uneventful contest until Beaton intervened eight minutes before the break.

Morelos hit the deck as he went past Stryjek while chasing down Steven Davis' sublime ball over the top.

Beaton looked for a moment set to point to the spot before changing his mind and reaching for the top pocket to book Morelos.

Gerrard exploded on the touchline and had every right as replays showed Livi's Polish keeper had made clear contact as he clipped Morelos' heel.

Rangers had a decent claim for another penalty moments later as Joe Aribo sent Ryan Kent down the left. The winger's cross was blocked but only as far as Arfield, who squeezed wide just as Sibbald dived in late.

Again Beaton looked away but he could not escape Gerrard's gaze as the irate boss strode onto the pitch to confront the official at half-time.

A yellow card was not enough to halt his outburst and he spent the second half watching from the stands.

His mood was not helped either by the sight of an offside flag going up just as Connor Goldson headed home from Barisic's free-kick four minutes after the restart.

A Fitzwater block then frustrated Kent as Aribo released the former Liverpool player through the middle.

If the half-time bust-up had not been explosive enough, Beaton was then forced to momentarily call a halt to the action as a barrage of fireworks were let off outside the ground in the 55th minute by Rangers fans hailing what they expect to be the imminent arrival of the club's 55th league crown.

Once the banging ceased – and some debris that had rained down on the pitch was removed – the action resumed with Morelos driving onto a Glen Kamara pass but Stryjek was down smartly to save.

Morelos took the wrong option with 15 minutes left as he fizzed across goal when he had Kent and substitute Cedric Itten screaming for a cut-back.

However, there was no complaints from his team-mates with three minutes left as he bundled home his 14th goal of the season after Stryjek spilled a Davis shot at his feet.