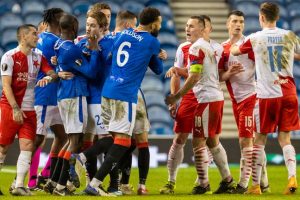 Rangers manager Steven Gerrard has said Glen Kamara has claimed he was racially abused by a Slavia Prague player near the end of Thursday night’s Europa League game.

In the closing stages of the match, Rangers midfielder Joe Aribo was booked for a late challenge and a further foul by Connor Goldson led to some furious confrontations between both sets of players.

Goldson and Slavia centre-half Ondrej Kudela were booked as a result and Kamara was visibly furious with a comment made by Kudela, which Gerrard hopes is now the subject of a thorough UEFA investigation.

“You build relationships in football, and I’ve built a very strong relationship with Glen Kamara. I believe him in what he’s claiming, and other people heard it being said,” Gerrard said after the match.

“It’s over to UEFA now, and I hope it’s not pushed under the carpet. The Slavia player has caused this, and he’s caused it to escalate. Something needs to happen quickly that is above me.

“That situation is not normal; why does he cover his mouth to say something? Their people are trying to defend him, and saying he doesn’t do it.

“All that we can do is hope that UEFA do something about it. I don’t really want to talk about football. I can’t be any more proud of my players, the incident has soured a good game between two good teams.

“The players said it didn’t cross their mind to come off the pitch. It was important to get communication with Glen, and he wanted to continue.

“It’s very difficult to say what should happen. The only way to eradicate it is for people high up to do something. It doesn’t make sense what their player has done; we’ll see what happens.” 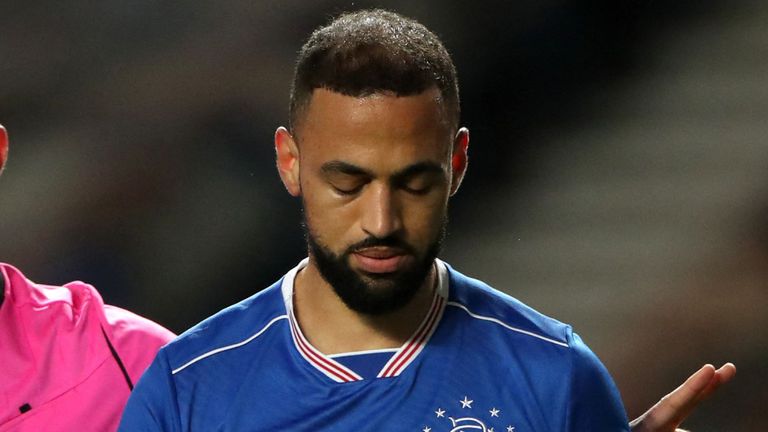 The comments were made in the form of emojis on a post Roofe published and in the wake of his sending-off in Rangers’ 2-0 Europa League defeat to Slavia Prague.

Roofe was dismissed for catching the goalkeeper’s face with a high boot when challenging for the ball 61 minutes into the tie.

Leon Balogun was sent off 12 minutes later as Rangers crashed out of the Europa League 2-1 on aggregate.

If you see a reply to Sky Sports posts and/or content with an expression of hate on the basis of race, colour, gender, nationality, ethnicity, disability, religion, sexuality, age or class please copy the URL to the hateful post or screengrab it and email us here.

Kick It Out reporting racism