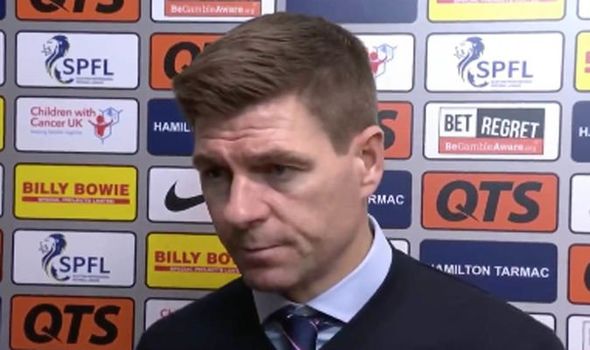 Rangers boss Steven Gerrard’s frustration was laid bare for all to see as he blasted his Gers flops after Wednesday night’s defeat to Kilmarnock looked to deal a knockout blow to their Scottish Premiership title hopes. The 2-1 Rugby Park loss, combined with Celtic’s 5-0 win over Hearts, left Gerrard’s men 10 points adrift of their rivals at the top of the table.

Rangers have only won three of their six top-flight matches since the winter break, with a defeat to Hearts and a 0-0 draw at home to Aberdeen impacting their hopes of ending an near-nine-year trophy wait.

The Ibrox club are now banking on their arch-rivals slipping up if they’re to have any chance of closing the gap and then overhauling Neil Lennon’s men.

Gerrard was furious following Rangers’ latest title race setback and took aim at his squad – before admitting the buck ultimately stops with him.

“I thought we had the mentality and the characters to sustain a push but on the evidence of the last four-five weeks I’m getting proven wrong,” Gerrard told BT Sport. “But having said that, it’s me as well because I’m responsible for that group of players.

“I’m going to have to do some real analysing of some individuals and where we are because I thought we were in a better place than what we’ve shown over the last four-to-six weeks.

“The second-half we didn’t go out like a team in the position of us, which is trying to sustain a title push. We looked all over the place, we couldn’t handle a simple long ball.

“Our leaders in the team couldn’t clear our box. We’ve got some issues at the moment but I’m responsible for them.”

Rangers had looked on course for three points at Kilmarnock thanks to Scott Arfield’s first-half strike and thought they’d gone ahead again after Stephen O’Donnell equalised.

However, Alfredo Morelos’ goal was ruled out for a push and they were made to rue their missed chances when Eamonn Brophy smashed in an 88th-minute winner.