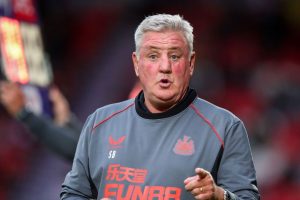 Steve Bruce can avoid the chop – but only if Newcastle begin the season well, says John Barnes.

The Toon chief was drafted in two years ago to replace Rafa Benitez after a short stint with Sheffield Wednesday.

But the 60 year-old has endured a strained relationship with supporters and was under fierce pressure last term after overseeing a run of just two wins in 21 matches.

However, after a quiet summer in the transfer market the pressure could be on again.

Barnes, who made 40 appearances for Newcastle during the latter stages of his career, reckons positive early results for Bruce this time round are a must.

"His survival depends on how they start," said Barnes.

“Fans will support them if they are winning. But if they lose it will be equally as difficult, if not more for him, than it was last year.

“Fans will be back in the grounds this season. When they looked like being relegated last year they did well because there weren’t fans booing, it meant they could play freely and came through it well.

“All managers are under appreciated by fans, unless they’re Jurgen Klopp or Pep Guardiola, and going to be wining all the time.

“The ownership situation at Newcastle doesn’t help. They [the owners] have bought him in, and that animosity between fans and owners doesn’t help. It isn’t personal with Steve.

“The fans aren’t happy with the hierarchy, and they bought him to the club, so by extent, fans are unhappy with him too.

“Football can change overnight, though, especially if you’re winning.”

During his loan stint at the club, he scored eight goals in 14 appearances and set a new record by becoming the youngest player to score in seven consecutive games.

The Toon have now secured his services permanently after a £25m deal plus add-ons was agreed with Arsenal.

"It's great business for Newcastle," he added.

"He scored a lot of goals towards the end of last season which saved them. But it's also good business from an Arsenal perspective.

“His performances and goals last year didn’t mean he'd go back to Arsenal and get in the team, similarly to Jesse Lingard at Manchester United, after his spell at West Ham.

“It’s a very positive move, Joe has a good attitude, has found a place to play regular football and will show his worth. He could have easily gone back to Arsenal and tried to get in the team, but he made an excellent decision moving on.”

John Barnes was speaking to bonuscodebets.co.uk