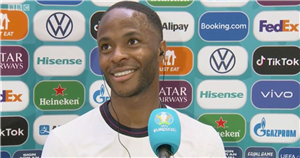 Raheem Sterling was left unimpressed during his post-match interview when asked if he had justified his selection despite scoring England's only goal in their Euro 2020 opener.

Sterling – who was named the Star of the Match – latched onto a through ball from Leeds' star-man Kalvin Phillips and turned the ball past a flatfooted Danijel Subasic in the Croatian goal.

It was the first time in the Euros' 61-year history that England have won their opening fixture, and the first time Sterling has found the net in an international tournament.

And Sterling was less than impressed when asked if he had justified his selection.

"Have I justified my selection?" Sterling said before falling silent for several seconds almost rolling his eyes.

Sterling – after being born in Kingston, Jamaica – grew up in the London Brough of Brent, in the shadow of Wembley.

And in his home neighbourhood, Sterling struck gold: "It feels good to score. I always said if I played at Wembley at a major tournament I had to score and it's great to finally do that.

What did you make of Sterling's performance? Let us know in the comments section

"There's a lot of different reasons why I haven't scored for my club and it's totally irrelevant now. I'm here with England and I'm enjoying my football. That's the most important thing.

"It's great to get off to a win and now we have other games to look forward to.

"It's been a long season for me but I couldn't wait to get here and get started with England. With England, I knew it would be a positive one."