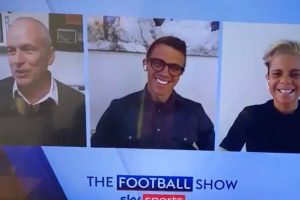 Former Liverpool defender Stephen Warnock was caught in an embarrassing gaffe on Sky Sports as he debated Ryan Mason's appointment at Tottenham.

Following the sacking of Jose Mourinho on Monday, academy boss Mason was put in temporary charge of the club, with Monday's training session put under his care.

The ex-midfielder, who tragically had his career cut short by injuries, is expected to be in charge until the end of the season alongside Chris Powell.

However, former England defender Warnock admitted live on Sky Sports that he didn’t agree with the appointment, not realising he was actually on-air.

Seemingly speaking to someone without their microphone turned on, he said: “Mason? No, I don’t agree with that, Ryan Mason… I don’t know, but what I’m saying is that if you get a figure…” This is where presenter Rob Wotton, who did not realise the show was back on-air, butt in, whipping off his glasses and trying to play down Warnock’s comment.

“Oh there we go, welcome back,” he said hastily. “Still just reflecting and reading this breaking news we’re getting this morning about Tottenham.”

Warnock initially tried to laugh it off, but was later forced to apologise for his comments.

Tottenham chairman Daniel Levy thanked Mourinho for his efforts while in charge at Spurs, admitting his sadness that things did not work out for the Portuguese.

He said on the club’s website: "Jose and his coaching staff have been with us through some of our most challenging times as a club.

"Jose is a true professional who showed enormous resilience during the pandemic.

"On a personal level I have enjoyed working with him and regret that things have not worked out as we both had envisaged.

"He will always be welcome here and we should like to thank him and his coaching staff for their contribution."