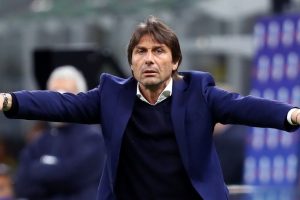 Former Chelsea and Inter Milan boss Antonio Conte is the front runner for the Tottenham job – but some Spurs fans are concerned about how their squad will adapt to his dangerous tactics.

Conte is available for free after leaving his post as Inter Milan manager last week following a disagreement over the club’s transfer policy.

The 51-year-old guided Inter to their first Serie A title in a decade this season, but he now looks set for a return to the Premier League.

It’s not just Tottenham who are keen on a move for the Italian, with Everton also eyeing a move after the departure of Carlo Ancelotti.

Spurs remain the front runners, though, and his arrival would represent another significant coup for chairman Daniel Levy.

Ordinarily, Spurs fans should be getting excited at the prospect of a serial winner turning up at their club.

But some have already developed concerns about how their players will adapt to the manager’s dangerous tactics.

Although Conte is more of a pragmatic coach, he does favour his sides playing the ball out from the back.

A clip that recently emerged online showed his Inter side knocking it about over the top of Barcelona at the Nou Camp.

Tottenham fans are worried that the likes of Eric Dier, Matt Doherty and Hugo Lloris might not have the ability to carry out Conte’s approach.

One wrote: “Imagine Dier doing that? This will kill me off.”

Another said: “I don't think we have the facilities for this.”

“The thought of Dier, Sanchez and Doherty trying this is making me sweat behind the knees”, wrote a third.

While a fourth person added: “Im creasing at the thought of Lloris, Sanchez, Dier and Doherty trying to do this.”

Conte is the odds-on favourite to replace Jose Mourinho at Tottenham after holding talks with the club this week.