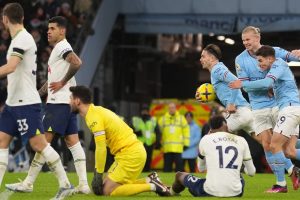 A Tottenham fan has been branded a "disgrace to football" after admitting to cheering on Manchester City to spite Arsenal.

Spurs were doing their north London rivals a favour when they went 2-0 up against their title challengers at the Etihad on Thursday (January 19) night. But City mounted a second half comeback to win 4-2 on home soil.

While there was disappointment in the away end, one Tottenham supporter was "buzzing" with the result. Speaking on talkSPORT post-match, they said: "Come on City, come on City! I am absolutely buzzing lads. Brilliant, brilliant."

READ MORE: Hugo Lloris compared to Cal the Dragon after another near post blunder for Spurs

Host Darren Ambrose asked: "Why are you buzzing?" To which the fan replied: "Because I hate Arsenal, I can't stand them. And they wanted us to win."

Recalling his thoughts at half-time, he added: "Come on Spurs, do what you usually do right, do what you normally do and bottle it."

What are your thoughts on the Spurs fan? Let us know in the comments section. Co-host Jason Cundy looked perplexed as he listened and told him: "You're a disgrace to football." But the supporter said: "I'm a Spurs fan, we cannot have Arsenal winning that league."

He wasn't the only one feeling that way, though – talkSPORT's own Jamie O'Hara had also admitted to hoping his side lost pre-match.

"It's a difficult one because we need to win because we've got to carry on trying to get Champions League football. But if we do win, we're basically handing Arsenal the Premier League title," O'Hara told The Mirror. City closed the gap to league leaders Arsenal to just five points, albeit having played a game more, while Spurs now find themselves five points adrift of the top four.