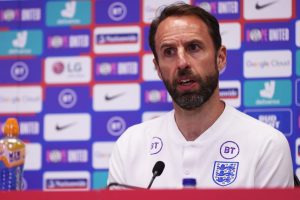 Gareth Southgate has hit back at his critics after being mocked for picking FOUR right-backs in his England squad for the Euros.

Southgate has been labelled a "joker" and "idiot" on social media after performing a U-turn and naming Trent Alexander-Arnold along with Kieran Trippier, Kyle Walker and Reece James in his final 26-man squad.

It is the first time a Three Lions boss has selected four right-backs in his squad ahead of a major tournament.

But Southgate insists he knows what he's doing – and would have picked up to six full-backs in the same position if he could. Southgate, who has only named five recognised midfielders, said: "We went through this last week. Yes, we have four players who sometimes play at right-back with their clubs.

"Basically they are in our best 26 footballers and that is why they are in the squad – and if I could have picked a fifth or sixth right back I probably would have done."

England kick off their preparations for the Euros with a warm-up game against Austria in Middlesbrough tonight.

And Southgate has been left sweating on the fitness of defender Harry Maguire, who is struggling to recover from damaged ankle ligaments ahead of the opening group game against Croatia. Southgate also has doubts about Jordan Henderson and he added: "We have just got to keep assessing him and updating where he is. With Jordan (Henderson) and Harry, we have selected a squad that, if they don't get there, we are not in a situation where we are short of numbers and we haven't got cover.

"It is not like repairing a machine. It's a human body and you can have little setbacks for any number of different reasons. Our aim is to progress them the best that we can. The most important thing is that we don't push them beyond the point they are ready for – that would be stupid, negligent."

Despite axing Jesse Lingard from his final squad, Southgate will take the bizarre step of starting the Manchester United star at the Riverside.