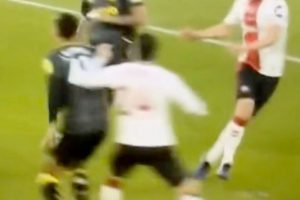 Southampton fans were left fuming at the “pathetic” VAR decision that saw their goal ruled out against Aston Villa at St Mary’s.

The Saints thought they had gone in front after James Ward-Prowse fired in a deflected strike past Emi Martinez in the 62nd minute. Kyle Walker-Peters delivered a cross which was brought down by Mohamed Elyounoussi in the box, before a scramble saw the ball fall fortuitously for Prowse.

But a three-minute VAR check resulted in the goal being disallowed for a foul by Elyounoussi. The winger was deemed to have stamped on Jacob Ramsey's right ankle during the build-up, leading to the referee's initial decision being overturned.

Replays of the incident were shown on the big screen as chants of ‘You don’t know what you’re doing” were directed at the referee.

Meanwhile, Southampton fans back home took to social media to voice their outrage, with many assuming the 'clear and obvious error' by Michael Salisbury referred to a slight nudge in the back by Elyounoussi.

One Twitter user wrote: “Pathetic. He was nudged in the back, was fine, then threw himself down holding his foot three seconds later.”

Do you think Southampton's goal should have stood? Let us know in the comments section.

Another angry fan tweeted: “Should have been a goal – is he a piece of paper to fold like that from a tiny nudge.”

A third commented: “That is absolutely pathetic,” while a fourth added: “Never a foul.”

Villa midfielder Ramsey said after the game: "My opinion was that I was going to head the ball and he's caught my ankle. I felt it was enough to go down. Thank god for VAR. Thankfully it got disallowed. "If he didn't touch my ankle I was going to clear the ball, so I'd say [it was a clear and obvious error]."

In an agonising blow to the Saints, Villa went on to score just over 10 minutes later. Douglas Luiz delivered a brilliant ball into the area which was headed in by an uncontested Ollie Watkins.

The defeat sent the home side back to bottom of the table after coming close to just their fourth win of the season. Manager Nathan Jones will face Newcastle next in two EFL Cup ties, with an FA Cup fourth round fixture against Blackpool to be played in-between.