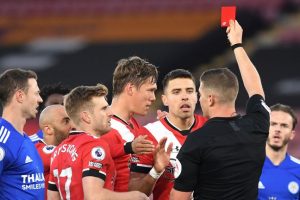 Vestergaard was sent off less than 10 minutes into what ended up a battling 1-1 draw for Saints against Leicester at St Mary’s on Friday Night Football, for what the PGMOL described as the denial of a clear goalscoring opportunity against Jamie Vardy.

That decision, and subsequent approval by VAR, came despite television pictures clearly showing Vestergaard winning the ball before making any contact with his opponent, leaving Sky Sports pundits Jamie Redknapp and Darren Bent in agreement no foul had been committed whatsoever.

When presented with the explanation from the Premier League’s refereeing body, Hasenhuttl added his own frustration, but reserved praise for the manner of the result his out-of-form side dug out against their Champions League-chasing visitors.

He said: “The official explanation was denial of a clear goalscoring opportunity. The goalkeeper was near the ball, he could pick it up. I think he [Vardy] would never get this ball. This explanation is simply wrong.

“I thought it was [going to be] a penalty and then it would be even more difficult, but when you see the red card then you see that it was absolutely the wrong decision and we deserved to get something today.

“Jon Moss has seen it, the VAR, and he says it’s a red card, although Vardy never had the ball. The denial of a clear goalscoring opportunity is an argument that I cannot agree [with].

Hasenhuttl also confirmed his plans to appeal against Vestergaard’s dismissal.

Leicester’s point takes them to 63 for the season, the same tally they managed across the whole of 2019/20, but it still may not be enough to guarantee them Champions League football next season.

The Foxes hold an eight-point lead over fifth-placed West Ham but the Hammers have a game in hand at Burnley on Monday night, while Brendan Rodgers’ side still face trips to Old Trafford and Stamford Bridge in their remaining four games.

Despite that, Rodgers remained upbeat when speaking to Sky Sports after a disappointing evening at St Mary’s, and said: “It does feel like a missed opportunity, but it is another point towards where we want to go. It takes us to 63 points; we’ve always known we’ve got other games to win this season. We’ve got four games to go and are in a brilliant position.

“We didn’t do enough to win the game. Normally in this type of game we are very good, but we didn’t pick up the tempo of the game until we went behind. Give credit to Southampton, they defended deep and compact with 10 men and made it difficult for us. But we’re disappointed.

“The sending off was an advance to us but the game was too slow, and the speed of our game was not quite at the tempo you would want to shift the ball about. We arrived in some really good positions but didn’t quite have that precision or timing on that final pass. It’s disappointing, we always want to win and have shown this season we are a team that will do everything we can to win, but it just wasn’t quite enough.”