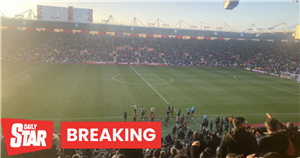 The Premier League fixture between Southampton and Aston Villa was interrupted by a drone flying above St Mary's.

Referee Michael Salisbury took both sets of players off the pitch as Villa were set to take a free-kick in a promising position with half-time approaching. The drone had been spotted flying in and around the ground and police were brought on to guard the tunnel.

After a nine-minute delay play was resumed on the south coast, with the score 0-0. While a rare sight, the unusual situation also happened as Brentford hosted Wolves last season. That clash in January 2022 was halted for 20 minutes while the issue was resolved.

READ MORE: Terror threat among reasons drones are banned at grounds as Villa game is paused

As much as a drone may been seen as a minor issue by some, there are two main safety reasons given for why a match must be stopped while one is overhead.

A report by John Newsham for The Football Safety Officers Association explained that the flying objects are banned because they could fall and injure someone, or may possibly be weaponised.

There's also the concern that the person behind the drone could be illegally broadcasting or recording the sporting event in question.

Nigel Wilson, from Bingham, Nottinghamshire was fined £1,800 in 2015 for flying drones over Prem stadiums. That was the first case in England of a person being prosecuted for using drones after a police-led operation.

He'd captured footage at Anfield during a Liverpool European match, at the Emirates during a north London derby between Arsenal and Tottenham, and at the Etihad when Manchester City had faced Spurs.