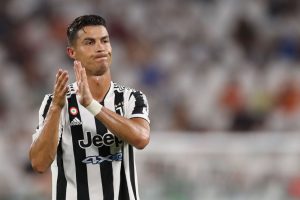 Cristiano Ronaldo has missed Juventus training, according to ESPN sources, as his proposed move to Manchester City edges closer.

Sources told ESPN on Thursday that Ronaldo was close to finalising an agreement with City after speaking to manager Pep Guardiola.

He left Juve training earlier in the week with a suspected arm injury and sources at Juve confirmed to ESPN that Ronaldo did not take part in training on Friday.

City had made Tottenham Hotspur forward Harry Kane their No. 1 target this summer as they look to bring in a striker but after the England captain announced he was staying at Spurs, the Premier League champions turned their attentions to Ronaldo.

Ronaldo’s future has been the subject of speculation throughout the summer and the five-time Ballon d’Or winner hit out at the “disrespectful” transfer talk on Instagram.

Ronaldo joined Juve in 2018 after nine seasons with Real Madrid where he won the Champions League four times and LaLiga twice.

In Italy, he won back-to-back Serie A titles in his first two seasons.

Should the 36-year-old complete a move to City, he would return to the Premier League for the first time since 2009 when he left rivals Manchester United, having won three titles and the Champions League.

“I don’t know what to make of it, to be honest,” the Derby County manager told a news conference. “If you’re asking me if I think it’s possible then I have major doubts that it is a possibility.

“Cristiano has got a great legacy at United. I don’t think he’s going to move somewhere for financial reasons.

“I’d be unsure if that’s going to happen. I think there’s more chance of it being Paris Saint-Germain if he is to leave Juventus.”

Ronaldo will also come up against his old rival Lionel Messi if he completes his move to City as they were drawn alongside PSG in the Champions League group stage.