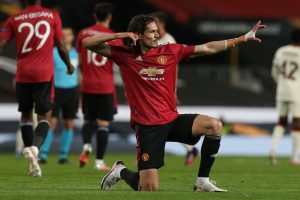 Cavani looked set to leave Old Trafford after just one season after growing disillusioned with life in England.

The 34-year-old is wanted by Boca Juniors but after rediscovering his best form with five goals in April, a source close to the Uruguay international has told ESPN he is now leaning towards remaining at United.

Cavani and his representatives are set for talks with the club before the end of the campaign. He remains upset at receiving an FA suspension over a controversial Instagram post but, sources have told ESPN he is also keen to stay in Europe for as long as possible ahead of the 2022 World Cup in Qatar.

Speaking after the 6-2 win over Roma in the Europa League semifinal first leg on Thursday during which Cavani scored twice, Solskjaer said he wants to convince the former Napoli and Paris Saint-Germain forward to stay.

“He was out for a long time before he came here,” he said. “He’s had injuries, worked hard and showed his quality. He knows I’d love to have him for another year. I understand it’s been very difficult for him.

“I’ve promised him Old Trafford and Manchester is a different place with fans in and I must try to get that feeling that Manchester is a good place to live. I’m doing my best.

“We don’t have to sell it to him, it’s about how he feels coming in every day, the team we are creating, he’s part of it.”