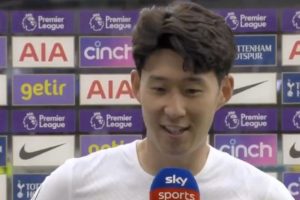 Tottenham match-winner Son Heung-min insists he couldn’t hear the chants of ‘are you watching Harry Kane?’ during his side’s victory against Manchester City on Sunday afternoon and says Nuno Espirito Santo’s squad paid no attention to the transfer rumours linking the England captain with City pre-match.

In the absence of their talismanic striker, who is believed to want to join reigning Premier League champions City, Spurs won 1-0 thanks to Son’s second-half strike.

Kane was left out having only returned to training late this week, with Nuno saying pre-match: “He’s continuing his preparation. The delay and all these things, I think Harry needs to work.

“He worked today and he’ll keep on working until he’s ready to help the team.”

City fans taunted the hosts about Kane’s apparent desire to join them during the match with chants in the first half of: ‘Harry Kane, he wants to be blue.’

But Spurs supporters hit back in the closing stages while their team led 1-0 as the whole stadium in unison chanted: ‘Are you watching Harry Kane?’

The north Londoners held on to see out a morale-boosting victory but Son stayed diplomatic when asked post-match about his team-mate and the chants directed at him.

Asked how speculation about Kane’s future affected the build-up to Spurs’ opening match of the new season, Son replied: “We are all professional, we wanted to focus on this game, it doesn’t matter who is involved or who is not.

“Everyone was really, really focused for this game. Obviously Harry is so, so important for us. Let H prepare well for the season.”

Quizzed about the chants in particular, Son continued to Sky Sports: “Obviously I was so focused I couldn’t hear. What I said before, we are so professional.

“We just focus on this game because last season we didn’t start well against Everton. It was a good example.

“We wanted to really start well this season. We did a great job and I just want to enjoy this afternoon.”

The win over City was Spurs’ first match with a capacity crowd in almost 18 months and Son admitted he relished playing inside a full stadium again.

“Incredible performance, I think everybody worked so hard to get these three points and obviously Man City are currently the best team in the world so we fought for the three points and this means a lot for us.

“A perfect start to the season. I’m so grateful, we missed them a lot, not only me. Football is all about the fans. We play for them. They support us.

“It means a lot for me and for us. I’m grateful they come to the stadium and support us. I really enjoyed this afternoon.”

Son’s manager Nuno meanwhile said when questioned about Kane by Sky Sports: “Look, Harry Kane is one of the best players in the world, honestly.

“We are very lucky to have him. He has to get ready and help the team. We still have to go to Portugal then we think about Wolves.”

The Portuguese coach added of the win: “The atmosphere was special off the hard work of the boys. They make any crowd proud when they work so hard.

“I’m sure that with commitment and the talent we have, we will be a good team. We are in the process of that. I am learning every day and I am very proud of them today, very proud.”