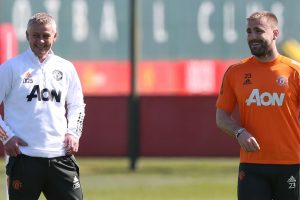 Ole Gunnar Solskjaer has challenged his Manchester United players to produce a perfect end to the season – and give themselves the chance to avenge Sergio Aguero's moment of glory.

United can cut rivals Manchester City's lead at the top of the table to eight points by beating Burnley at Old Trafford today.

Seven years ago, the Reds held exactly the same advantage going into the last six games – only to surrender the title with the final kick of the season when Aguero scored the most iconic goal in Premier League history as City claimed a dramatic victory over QPR.

Solskjaer doesn't expect Pep Guardiola's men to have a meltdown – but the United boss has warned his team they must be ready to pounce on any slip.

Solskjaer said: “Every game is important to Manchester United and we aren't going to just give points away easily.

“Can we catch City? Stranger things have happened in football. Bigger leads have been given away.

“City have been very strong and it's probably too much to hope and ask for.

“But we have got to win every game in the league.

“After that we can only hope that something happens to them.

“We can't control what they do. We've got to play it one game at a time because we've got some difficult matches left ourselves.”

United finished third last year, so Solskjaer will justifiably be able to claim an improvement if they have to settle for runners-up spot.

However, the Norwegian believes this can still be a breakthrough season for the team he has spent two-and-a-half years rebuilding – by winning a trophy.

United have lost four semi-finals on Solskjaer's watch and will now face Roma for the right to contest the Europa League final against Arsenal or Valencia.

Solskjaer revealed that the pain of losing to Sevilla at the same stage last season has been a driving force for his team.

He said: “We are aiming to finish the season on a high – and the best possible way to do that would be to win the Europa League.

“That's something we have been working on and thinking about for almost a year.

“The way we went out of the semi-final last season really hurt us.

“You can see from the focus the players have in the Europa League games that this time they want to go all the way to the final and lift the trophy.

“Last year is definitely driving us on. Sometimes you get extra motivation from set-backs.

“Sometimes set-backs can derail you, but sometimes they can really spur you on.

“We've lost four semi-finals as a group and I've seen the determination to go all the way this time.”

“But we have still got seven league games to play and we want to finish the season off strongly.

“We want to get as many points as possible on the board and also navigate our way through the semi.

“Roma are a good team. It's going to be difficult. But before we play them we've got a couple of tough games against Burnley and Leeds.”