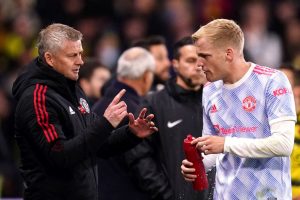 Manchester United have finally announced that Ole Gunnar Solskjaer has been sacked following a terrible run of form, with Saturday's 4-1 defeat to Watford the final nail in the coffin.

Solskjaer's reign comes to an end and after leading United to a second place finish and a Europa League final last season, the Norwegian has been sacked after managing just one win from their last seven Premier League games.

Michael Carrick will take charge for trips to Villarreal and Chelsea as United scout for an interim replacement, but Ole is no longer at the wheel.

Solskjaer spent just shy of three years in charge of United and made some incredible signings during his time, but he was also let down by his players, as some didn't go to plan.

Here Daily Star Sport take a look at Solskjaer's best and worst signings during his time in charge.

Solskjaer signed Bruno Fernandes from Sporting Lisbon in January 2020 for £55million, and the Portuguese star became an instant hit at the club, and United significantly improved upon his arrival.

As United began to gain momentum during Solskjaer's reign, many accredited Fernandes to much of the success and the midfielder brought a winning mentality to Old Trafford.

Fernandes scored eight goals in 14 games to wrap up his first taste of United action in the second half of the 2019/20 season, and stepped up to the next level the following campaign.

18 goals and 11 assists followed as United reached second in the Premier League, and Fernandes has still been prolific this season despite the club's form.

Not many managers can say that they signed one of the greatest of all-time, but that's one accolade that Solskjaer can claim as he brought Cristiano Ronaldo back to United this summer.

Although it's been more of a nightmare return rather than a dream reunion for Ronaldo, he has continued his scoring form, making you question just how poor United would've been without him.

After arriving for £25m from Juventus, Ronaldo has scored nine goals in 13 games across all competitions, and has single-handedly kept United afloat in the Champions League.

There has been some criticism about Ronaldo's role in the team, but he's most certainly better in it as opposed to being left out. Raphael Varane was also signed this summer and instantly fit into the United defence, but they crumbled as soon as he was ruled out with injury, highlighting just how crucial he was as opposed to other options at the back.

With Victor Lindelof and Eric Bailly not seen as suitable starters to partner Harry Maguire, Solskjaer signed Varane from Real Madrid for £34m.

Varane's impact was almost instant and United will be desperate to get him back to full fitness with the defence extremely vulnerable in the absence of the Frenchman.

At only 28, Varane has many more years to give United, and their success will likely be down to his impact at the back.

Although Donny van de Beek still has a lot of promise, and United fans have been desperate to see more of him, the saga caused more harm than good to both player and manager.

Solskjaer and van de Beek were constantly at the centre of a selection dispute and so much attention was brought to the issue, which may have affected the former United boss.

The Norwegian may even regret signing the midfielder all together, due to the commotion it caused, but Solskjaer can't have been overly impressed with the star behind the scenes.

The transfer of van de Beek will constantly remain 'what could have been' for Solskjaer, and it'll be interesting to see how the midfielder is treated under Michael Carrick.

Daniel James was one of Solskjaer's first signings as United boss, as the Welshman arrived from Swansea in a deal worth £16m.

The winger wasn't a success, and although he meant well and showed signs that he could work well in United's side, it didn't work out and James was sold.

United made a profit on the winger, as £30m was received from Leeds, but the move was nothing more than a shambles from Solskjaer's perspective and it was a decision that the Norwegian got wrong.

James hasn't performed well for Leeds either, leaving the winger stuck in a rut as he attempts to find his feet in the Premier League.

Jadon Sancho was signed as James was heading out of Old Trafford, and United captured the star for £73m from Borussia Dortmund, but it's been a complete flop so far.

The Dortmund star that managed 50 goals and 64 assists in four Bundesliga seasons has failed to produce anything for United so far, and Solskjaer's plans this season would've been heavily reliant on Sancho.

Sancho hasn't hit the ground running, and it's cost Solskjaer in the most brutal of circumstances, in what so far has been a failure.

There's no doubt that Sancho can still become a star, but he's taking his time to find his feet in the Premier League.