Solskjaer told he should be "grateful" Pochettino took PSG job 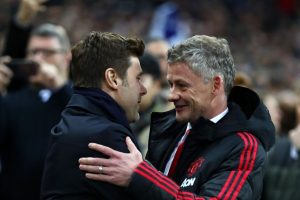 That is the verdict of former Old Trafford title winner Paul Parker, who believes Manchester United will be back to square one under the Norwegian should they lose to bitter rivals City at the Etihad today.

Parker won back-to-back Premier Leagues under Sir Alex Ferguson, as well as the FA Cup and League Cup during his five years at the club.

And he reckons all bets will be off regarding Solskjaer’s future – and that ­ex-Tottenham boss Pochettino would have been a shoo-in as a replacement.

After just one Premier League win in their last five games, United could soon slip out of the top four with in-form Chelsea and Everton on the march.

Parker believes that would pile huge pressure on Solskjaer, with United winning just three of their 10 league games – against Fulham, Southampton and Newcastle – since going top in January.

He says: “The way things are going I really think Solskjaer should be grateful Pochettino got the job at PSG.

“And it would be a lot worse for him the way United have been playing lately if there were fans in the stadiums – they’ve been shocking.

“Some fans might not have expected United to stay top of the table but in a season when anything can happen, why not?

“The slide has just proved United are lacking the quality in midfield, wide areas and attack to make them title contenders. But they still should be doing a lot better with a squad that’s not really been hit by many injuries.

“The way results have gone lately, the poor performances and no goals in their last three games, I’d think Solskjaer should be looking over his shoulder.

“It just isn’t good enough and I don’t see United making the progress that he sees.”

Parker isn’t holding his breath that United will burst back to life against Pep Guardiola’s runaway leaders. And he believes a draw is the best Solskjaer can hope for with United looking scared to win the big games with a midfield lacking creativity and a misfiring forward line.

For all the fanfare around Marcus Rashford and Mason Greenwood, Parker believes both are underperforming and over-hyped.

“Everyone talks about Rashford and I’m pleased with what he’s done off the pitch,” says Parker.

Do you agree with Parker's scathing verdict on Solskjaer? Have your say in the comments.

“But he’s not producing ­regularly enough on it in terms of goals and performances.

“With Greenwood, I can ­understand people will say he’s only 20. But I’d say we’re getting to the point where we need to see more from him because he has the ability.

“You see what Ryan Giggs was doing when he was 19 and 20 – and Greenwood isn’t in the same league.

“I accept you can’t compare them as players, but even when it wasn’t happening for Giggsy he was still getting on the ball and trying to be a direct threat.

“Greenwood disappears too often in games and you’re waiting for the odd shot from him. That’s not enough, he has to be more involved. And don’t get me ­started on Anthony Martial. He has talent but shockingly doesn’t look as if he wants it enough.

“That’s why the one player who has to play in every single game is Edinson Cavani.

“With the other three it’s like going to the circus and having a juggle up – you don’t know what you’ll get from Rashford, Martial and Greenwood.

“Against Chelsea and Palace the forwards weren’t making any clever runs.

“That makes it hard for Bruno Fernandes, who is off the pace himself at the moment.

“Whatever happens against City I just hope it’s a better game than December at Old Trafford which ended 0-0 and was one of the worst derbies I’ve ever seen.”