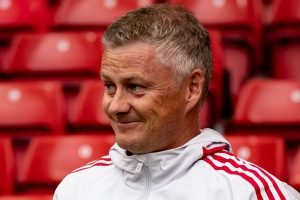 Ole Gunnar Solskjaer admits he will have no excuses if Manchester United fail to win the Premier League title this season.

United have not been crowned champions since 2013 and finished runners-up to neighbours Manchester City last time out.

But Old Trafford bosses have backed Solskjaer in the transfer market this summer, after spending more than £110m on superstars Jadon Sancho and Raphael Varane.

More signings could still follow – and Solskjaer knows he has been given all the tools he needs to go on and make United kings of English football again.

Solskjaer has also been handed a new long-term contract and knows he has to start repaying the faith his club has shown in him. The Norwegian said: "Every manager would be happy the sooner and the earlier the deals are done. This year we've managed to get it sorted.

"The two we've got in will make a huge difference for us, this season short-term and also long-term.

"Raphael is in his prime. He's the same age as Harry Maguire and I've got a fantastic group of centre-backs.

What more do Manchester United need in the transfer market? Let us know in the comments section.

"With Jadon as well, with the young forwards we've got, it's exciting. As a manager you can't ask for more backing when you've got these two in as early as we have.

"We've scrambled before towards the end of the window – and now I have to say I think we're in a good position."

Since Solskjaer spoke, though, United have been forced to cancel Saturday’s pre-season friendly at Preston following a Covid outbreak at the training ground.

Around eight players and members of the coaching staff have tested positive following a round of lateral flow tests.

United informed Preston of the news at 7pm on Thursday evening, leaving the Championship club facing a huge bill to pay for staging the game.

Preston are now trying to find a replacement team to step in.

All those who tested positive will now have to isolate for 10 days – just over two weeks before the new Premier League season begins.