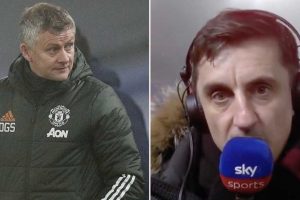 A day after rivals Manchester City made it 21 wins in a row to open up a 15-point gap at the top, the Red Devils were left frustrated in a goalless draw with the Eagles and have won only one of their last five matches in the Premier League.

Top-four rivals Liverpool host Chelsea on Thursday night and the two clubs will want to close the gap on Solskjaer's struggling side.

Indeed, it was a frustrating night for the Red Devils who managed just one shot on target against Roy Hodgson's well-drilled Eagles side.

Solskjaer told Sky Sports: "It's disappointing. We were just a little bit off. If you're not spot on you're not going to win games.

"Sometimes it's human nature, sometimes you don't work at your best. Today we didn't. It's been a long season but everyone has the same season.

"We kept giving the ball away. There were times in the first half we built some pressure, had some half-decent chances but we kept giving it away.

"Then you don't build momentum and that's the game you get."

Former United hero Neville, on the other hand, didn't hold back in his criticism and believes the Red Devils are "sleepwalking" into a top-four race.

Neville said on Sky Sports: "They (United) looked lethargic and well off it, their body language looked really drained.

"I thought they would cement second place by picking up points at places like Crystal Palace. Now Liverpool and Chelsea will think they are in with a right chance.

"It wasn't a good night for United. It doesn't matter who's in charge, you can't be boring and that was boring tonight.

"They are sleepwalking in games. They are going to end up in a top-four race if they are not careful."