Socceroos star not in City’s sights 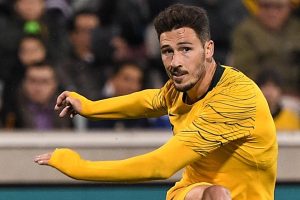 Germany-based Leckie was the latest attacker linked with City, who will lose star striker Jamie Maclaren to Socceroos duty during the A-League finals series in June.

But just as Kisnorbo last weekend quashed speculation that former Socceroos marksman and current free agent Scott McDonald was joining City, he also dismissed reports suggesting that Leckie, who plies his trade with Hertha Berlin, was on his way next month to the A-League title contenders.

“Rumours are rumours – I haven’t heard anything about it,” Kisnorbo said.

With Leckie set to join Maclaren in the Socceroos’ squad for four World Cup qualifiers in Kuwait, him moving to City would not solve the club’s problem of needing a replacement for Maclaren during the finals series.

The likelihood is that 30-year-old Leckie will serve the remaining few months of his Hertha Berlin before moving to another overseas club.

Should the former Adelaide United star eventually return to the A-League, it would probably not be until after the 2022 World Cup in Qatar.

Kisnorbo would not commit to signing a striker during the current transfer window to cover for the certain absence of Maclaren.

“With players, you just can’t bring people in willy-nilly because of the rules,” he said.

“We need to just wait and see what’s happening first, who gets picked for the Socceroos and then see what happens after that.

“We can’t just bring people in for the sake of bringing them in. It’s got to all fit into the salary cap.”

City can take another step towards the Premier’s Plate on Thursday night when they host cellar dwellers Newcastle at AAMI Park.

Kisnorbo’s men are unbeaten in their past four games but had to settle for a last-start 1-1 away draw with Macarthur FC after a mistake from teenage defender Kerrin Stokes gifted Bulls midfielder Michael Ruhs a late equaliser and his first A-League goal.

“After the game he wasn’t feeling great. Unfortunately, that’s the way it is,” the City coach said.

“It’s time for him to analyse himself and learn from the mistake that happened and to move on, to improve and work hard in training.

“We all make mistakes. The next thing to do is learn from it … and make sure if put in that position again, it doesn’t happen again.”