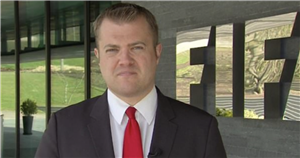 Sky Sports News favourite Bryan Swanson is leaving the company to take a role at FIFA.

He had joined Sky Sports in 2003 as their North East Correspondent before relocating to London and taking over from Dan Roan as the top dog.

Swanson has been known for his transfer updates around the window but will now leave Sky Sports to become FIFA's Director of Media Relations.

He wrote: "Today is my final day at Sky Studios, before leaving the company next week, rounding off an incredible 18-year journey.

"It's been an immense privilege to travel the world, interview the biggest names and cover so many memorable stories in sports news – not to mention the transfer window (Deadline Day, Totaliser, Deal Sheet) and VAR.

"Thank you to the committed teams at Sky Sports. They care passionately and it's been brilliant to learn from them.

"I've been in sports journalism since leaving school in 1997 and look forward to a career change as FIFA Director of Media Relations in Switzerland.

"Thank you for the memories – stay safe."

Swanson's exit comes amid plenty of changes at Sky Sports.

Jobs were reportedly set to be at risk – although there is no indictation that Swanson's was one of them.

Earlier this month, a Sky spokesperson said: "We are proposing to reshape Sky Sports and Sky Sports News for the future.

“This may result in some roles being made redundant, and the creation of some new roles. We are now entering a period of consultation, and will be discussing our proposed changes with our people.”