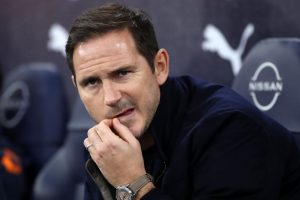 Well, that felt like it had been coming all season, didn't it?

In spite of his enduring popularity with the Everton faithful, Frank Lampard leaves Goodison Park with the lowest win percentage of any Toffees manager since Howard Kendall's doomed third stint at the club back in 1998.

There's no denying Everton's problems run far deeper than the man standing on the touchline, but it's true to say the Chelsea legend looked a little out of his depth during his tumultuous 12 month stint on Merseyside.

Following his second sacking in as many years, Daily Star Sport takes a look at where Lampard could go next.

Lampard will almost certainly have to drop down a division to pick up the shattered pieces of his managerial career, and where better to do that than at his former stomping ground?

Granted, Lampard only spent a few a months on loan at Swansea as a chubby-cheeked teenager back in 1995, but having prior links to a club is a sure-fire way to curry some much-needed favour with the fans before dealing with the inevitably fickle world of manager-supporter relations. So every little helps!

The Swans are currently mid-table in the Championship and aren't expected to part ways with manager Russell Martin unless things truly go t*ts-up in the next few months, but if they did, turning to someone like Lampard – who took Derby to the play-off final remember – wouldn't be the biggest of shocks.

Will Lampard ever manage in the Premier League again? Let us know what you think in the comments section below.

Speaking of Derby. Lampard remains a beloved figure at Pride Park after coming to within a John McGinn goal of leading the club to the Premier League in 2019.

Off the field the Rams are in disarray after getting relegated from the Championship last season following a -21 points deduction after falling into administration, but things appear to be on the up and up on the field with the club in line to land a play-off spot.

Would dropping down to League One be Lampard's cup of tea? Probably not, but having the chance to lead a club of Derby's stature out of the mire has got to be pretty appealing.

The Potters have come a long way since their Stokealona days. They've spent a grand total of £11m on players since they dropped down to the Championship four years ago, but the club's owners are far from penniless and they have one of the highest wage bills in the division to show for it.

Promotion back to the Premier League could be achieved via a couple of smartly-coordinated transfer windows, and just like he did at Derby, Lampard could use his connections to land some of the country's highest-rated youngsters on loan to do just that.

Say what you want about the ex-Chelsea midfielder but his talent ID is impressive, and if Stoke decide to part ways with Alex Neil – who hasn't exactly set the world alight since being appointed in August – then Lampard could well be top of their shopping list.

A slightly left-field option this one but don't you reckon Lampard feels far better suited to the opulence and splendour of Lake Como than he does to the rough and tumble of inner-city Liverpool?

The Italian outfit are currently treading water in Serie B, which might not sound like the most competitively-appealing job opportunity, but there are actually a dozen-and-one reasons why the move could be a shrewd one (aside from the possibility of bumping into George Clooney of course).

For starters, fellow Chelsea legend Dennis Wise, a man Lampard knows well, is president. The club is also owned by a couple of Chinese-Indonesian billionaires who have ambitious plans to turn Como into one of Italian football's biggest teams, while both Thierry Henry and Cesc Fabregas (who currently plays for the team) are minority shareholders. What's not to love?

Had his spell at Everton been a success he might have been able to replace Gareth Southgate in a couple of years, but if Lampard fancies an England job now he'll have to make do with one of the youth sides.

A stint in charge of the U21s might be just what the doctor ordered, actually. It would offer him the perfect chance to hone his craft and bone up on some of the basics without the threat of relegation looming over his shoulder.

Given his propensity to nurture and take chances on youth players, the job would probably fit Lampard like a glove and a successful run with the young lions could help springboard him back into a top job. After all, it worked for Southgate.

It doesn't seem all that likely given Lampard's hunger and ambition, but after back-to-back setbacks at Chelsea and Everton could anyone blame him if he decided to Gary Neville it and ditch management forever for a job-for-life in a cushy TV studio?

He had a brief stint working for BT Sport prior to his spell at Derby, and although he wasn't the most charismatic of pundits, the former England international knew his stuff and was about as articulate as they come on English TV.

The highs and lows of his managerial career would serve as yet another gun in his impressive analytical arsenal, but then again, if Lampard has proven anything over the past two-and-a-half decades in English football it's that he's much more of a doer than a talker, so we'd be very surprised to see this happen.