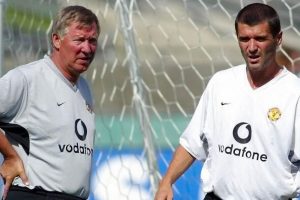 Wayne Rooney has recalled a seething Sir Alex Ferguson jumping over a desk to confront Roy Keane in an explosive bust-up before the Manchester United captain departed Old Trafford.

Keane's successful spell at United came to an end in 2005 following a fallout with Ferguson, who was left furious by an interview his skipper conducted with in-house television channel MUTV.

The Irishman was said to have slammed a number of his team-mates for their performances in a recent 4-1 defeat away at Middlesbrough, including Rio Ferdinand and Darren Fletcher.

After seeing the interview, which never aired, Ferguson then summoned him to a meeting in front of the entire squad – and a 19-year-old Rooney was present.

“When Roy Keane left the club, it’s well-known there was a meeting… I can’t tell you the details of what happened in the meeting," the now Derby County manager said on the Tony Bellew Is Angry podcast.

“Roy Keane's had a go at some of the players on the club’s TV channel and Fergie weren’t happy, so he's called a meeting.

Who would you back in a fight between Roy Keane and Fergie? Let us know in the comments section below

“Roy Keane said ‘let’s all watch it together’, so we’ve all gone into Alex Ferguson’s office; the coaches, Alex Ferguson and the whole squad.

“I think it was obviously a hangover from something which had gone on between Roy and the manager in the past probably.

"Anyway, it's got into an argument between Roy and the manager and a few different things got said.

“Then I've seen Alex Ferguson jump over his desk and I was thinking ‘Wow, this is crazy!’

“He jumped over the desk and was getting held back. It got calmed down, but the next day Roy Keane's come into training and then about 30 minutes later we've seen him driving off.