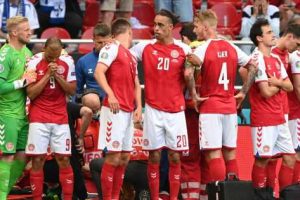 Denmark captain Simon Kjaer insists he's not a hero despite his quick-thinking actions that helped save Christian Eriksen's life during the European Championships.

Eriksen, 28, collapsed to the ground without anyone around him after suffering a cardiac arrest midway through the first-half of Denmark's Euro 2020 opener with Finland

In distressing scenes, the former Tottenham man received CPR on the pitch as his girlfriend was being comforted on the sidelines by Kjaer and Kasper Schmeichel.

The midfielder was revived and taken to hospital, where he was stabilised and fitted with an implantable cardioverter defibrillator (ICD) – otherwise known as a heart-starting device.

Kjaer was one of the first people on the scene as the horrifying incident unfolded and prevented his team-mate from swallowing his tongue as he placed him into the recovery position.

His heroic actions were widely praised after the match, but the 32-year-old does not see himself as a hero and believes anyone else would have done the same.

Speaking to Italian outlet, Corriere della Sera, he said: "I'm not a hero, I just did what I had to do, without thinking, like anyone else would.

"Then what happened, happened. I was ready to remain lucid, like all my team-mates. It was a team effort, obviously we would have done the same if he had been an opponent.

"Instinct guided me, and I did what I had to, automatically. It was the first time this happened to me, I hope it’s the last, too.

"That’s all. The only thing that matters is that Christian is fine now. That's the only important thing. I did it without thinking."

Eriksen returned to the Inter Milan training ground earlier this month for the first time since the incident, but his long-term future in Italy remains uncertain.

Under current guidelines, Eriksen cannot play for Inter again due to national restrictions on footballers playing with ICDs.

At the time, the club issued this update: "The Danish midfielder met the club directors, the coach, teammates and all of the staff present."

"He will now follow the recovery programme put forward by Danish doctors in Copenhagen, who will also coordinate the clinical follow-up. The Inter medical staff will naturally be kept informed and up to date throughout the process."