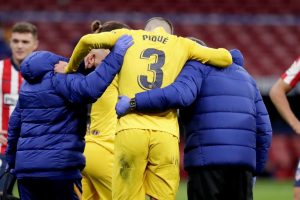 Gerard Pique made a miraculous recovery from a knee injury and has been included in the starting lineup for Barcelona’s Champions League game against Paris Saint-Germain on Tuesday.

The defender suffered ligament damage in Barca’s defeat to league leaders Atletico Madrid at the end of November and it was initially feared he would miss the remainder of the season. However, less than 90 days later, Pique has been counted on by Ronald Koeman for the round-of-16 first-leg tie at Camp Nou despite turning down surgery at the end of last year. Instead, Pique, who turned 34 earlier this month, opted for more conservative treatment and club sources say medical staff have been “stunned” by the speed of his return to fitness.

Koeman announced on Monday that the centre-back could be available against PSG and said that if he was in the squad it would be because he was in shape to start the game if needed.

Pique returned to full training at the end of last week, although lacks match fitness having not played a competitive game since the 1-0 loss at the Wanda Metropolitano on Nov. 21.

The temptation to start Pique against the French champions had increased on the back of the news that Ronald Araujo was ruled out for the match. Araujo sprained his ankle in the Copa del Rey semifinal first-leg defeat to Sevilla last Wednesday and has not recovered in time to face PSG.

PSG, meanwhile, are missing Neymar and Angel Di Maria through injury, but coach Mauricio Pochettino is hopeful Marco Verratti will be able to feature after shaking off a knock to train on Monday.