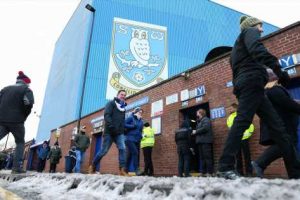 A game between Sheffield Wednesday and Wycombe Wanderers has been suspended after medics were scrambled to a fan in the stands.

Both sets of players left the field and headed for the dressing rooms.

It is not clear what has happened to the fan, but medical teams from both sides have rushed to the incident.

The incident occurred in the North Stand at Hillsborough in the 29th minute, and fans were seen waving their arms to get the attention of the official, who stopped the game.

There was a seven minute delay before the two sides returned to the pitch and play was resumed.

Sheffield Wednesday tweeted: "Play has stopped at Hillsborough, as the medical teams from both clubs are called to the North Stand."

We'll be bringing you the very latest updates, pictures and video on this breaking news story as it unfolds.
For all the latest news, make sure you visit: dailystar.co.uk/sport/football
And you can stay up to date with all the must-see headlines, pictures, analysis, opinion and video on the stories that matter to you.
Don't forget to follow us on Twitter @DailyStar_Sport – the official Daily Star & dailystar.co.uk Sport Twitter account – providing real news in real time.
We're also on Facebook @DailyStarFootball – offering unmissable news, features, videos and pictures throughout the day for you to like, comment and share from the Daily Star, Daily Star on Sunday and dailystar.co.uk.