Two Premier League fixtures on the menu this evening.

Of course we start at Bramall Lane and then head over to Manchester, where Pep Guardiola’s former champions Manchester City take on the recently crowned champions Liverpool.

Quite strange that that’s now considered one of the more ‘unimportant’ fixtures. Neither have much to play for aside from the odd goal or points record.

That one starts at 8.15pm and I’ll bring you LIVE coverage from the Etihad a little bit later.

Hello everyone and welcome to our LIVE coverage of Sheffield United vs Tottenham from Bramall Lane.

I would complain but the 100-day coronavirus-enforced suspension of all leagues has taught me to be thankful for any football.

Even the weird month where Belarusian football took over.

Three top-flight fixtures, zero goals, one point and six conceded… oh, and they’ve not had more than one shot on target in any of their games in the Premier League.

I think they need a project restart of their own. Let’s get going! 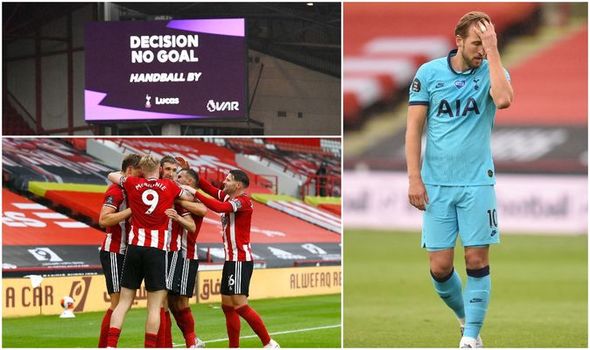 John Lundstram is a doubt for Sheffield United having been forced off during Sunday’s FA Cup quarter-final defeat to Arsenal with as shoulder injury.

Defender Jack O’Connell, who has missed the Blades’ last four fixtures with a knee injury could return to the starting XI.

Spurs’ only clean sheet in their last 22 away league matches was in a 0-0 draw at Watford on 18 January.