Sheffield United relegated from the Premier League after Wolves defeat 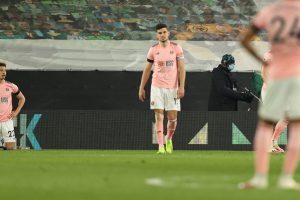 Sheffield United have been relegated from the Premier League with six games to go after losing to Wolves.

Willian Jose scored the only goal on Saturday night in what was a largely drab contest at the Molineux.

The defeat was Sheffield United's 26th of the season and means they will be playing their football in the Championship in 2021/22.

The Blades have had a woeful campaign in which they have picked up only 14 points from four victories and two draws.

Chris Wilder was in charge at Sheffield United for the best part of the season, having held the post since 2016. During this time he won promotion to the Premier League in 2019 but Wilder eventually departed by mutual consent in March 2021 with the Yorkshire club rooted to the foot of the table.

Paul Heckingbottom took over as interim boss, but he has lost every game he has taken charge of in the weeks since.

Ahead of the Wolves game on Saturday, fellow relegation strugglers Newcastle beat West Ham meaning the Blades had to win to retain their top-flight status for at least another week.

But Sheffield United couldn't get the better of Nuno Espirito Santo's side and have paid the ultimate price.