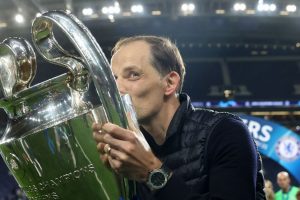 Alan Shearer has claimed three Chelsea players were likely to leave the club before Thomas Tuchel came in and rejuvenated the squad.

Tuchel hit the ground running when he joined the Blues and won the club's second-ever Champions League last season.

The start to this campaign has very much been more of the same having gone six games unbeaten, but defeat to Manchester City on Saturday put an end to that run.

Nevertheless, in his short spell to date, Tuchel has transformed Chelsea back into a force to be reckoned with and also saved some of the squad from leaving, according to Shearer.

The ex-England striker told BBC Sport: "I think Thomas Tuchel's done a fantastic job since he's been there. When you look at [Antonio] Rudiger, [Marcos] Alonso and [Cesar] Azpilicueta, I think some of those players were probably on their way out.

"They definitely weren't as sharp as they are now, he's tightened them up and they're now playing some good entertaining football.

"If they can keep [Romelu] Lukaku fit then I'm not sure anyone can match them this year."

What can you see Tuchel achieving with Chelsea this season? Let us know in the comments section.

Germany international Rudiger had fallen out of favour when previous boss Frank Lampard was in charge but has been a key fixture under Tuchel.

The club are currently trying to tie him down to a new contract as his expires at the end of the season, with Tottenham and Bayern Munich circling.

Azpilicueta also sees his deal with the club end in 2022, but the captain, who will have been with the club for a decade by that point, will likely re-sign.

Alonso, meanwhile, has established himself in the starting XI after Ben Chilwell returned late for pre-season due to his Euro 2020 campaign with England.

He is more suited to the wing-back role that Tuchel wants his left-back to adopt in his five-at-the-back formation than Chilwell is.

All three players were starters against City and will likely be key fixtures in helping their German boss attempt to achieve more silverware this season.