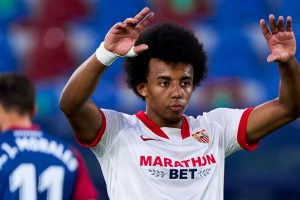 Sevilla are asking Chelsea for £60million for the services of Jules Kounde as the blues look to push for a move before transfer deadline day.

Thomas Tuchel has been interested in the young French centre-half as he looms to improve his defence heading into the new campaign.

Chelsea are looking to replicate their European success lasts season into the domestic campaign this year.

According to Italian outlet Sportitalia, Sevilla are asking Tuchel for £60million for the Frenchman, and there has been no official bid from the English side.

However, Chelsea are expected to make an approach for Kounde before the deadline.

The deal revolves largely around Kurt Zouma and his move to West Ham.

Chelsea have already spent heavily this summer on acquiring Romelu Lukaku from Inter Milan for £103million, according to Transfermarkt.

And Tuchel will likely have to sell before he can spend a further £60million on the highly-rated defender.

West Ham look like the most likely destination for Zouma, and the clubs have reportedly negotiated a £25million fee for the Chelsea man who is yet to feature in the Premier League this season.

According to Sky Sports, Zouma has yet to agree personal terms with the Hammers, but the sides are satisfied with how talks are progressing.

Do you think Chelsea will sign Jules Kounde? Let us know in the comments section

Chelsea have started their 21/22 campaign in fine form, and they have beaten Crystal Palace and Arsenal in a perfect start.

The Blues are now gearing up for a mouthwatering clash with Liverpool, who are also undefeated so far this season.