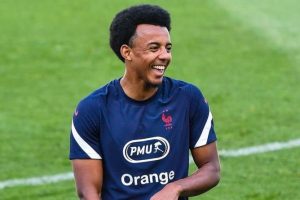 Sevilla would prefer to receive a player in part-exchange for Jules Kounde this summer, according to reports. Chelsea are in talks to sign France international Kounde, with personal terms already reportedly agreed. Sevilla are willing to let the 22-year-old leave in this window if the deal is right for them.

Chelsea are yet to make any major signings so far this summer.

However, Thomas Tuchel has stepped up interest in Kounde in the last week.

Chelsea duo Kurt Zouma and Andreas Christensen have been linked with potentially being part of a deal that sees Kounde end up at Stamford Bridge.

Castles said: “The guidance I have is it actually suits Sevilla to get a defender in in part-exchange for Kounde, as opposed to cash.

“Why is that the case? It’s because of the La Liga spending limitations, which are hitting every club in Spain at present.

“Hitting them in a very, very aggressive way.”

Bordeaux will receive 30 per cent of whatever fee Sevilla receive for the defender.

Castles says Sevilla will still earn a huge profit on Kounde but says it just strengthens their desire to receive a like-for-like player in return.

He added: “I think Sevilla will win on the deal in that they got a very good player for the time they had him at the club and they will profit overall from it.

“[The sell-on clause] ties their hands in terms of what they can accept for an offer.

“Also, if they accept straight cash then they will not get all of that money to spend on a replacement.

“Therefore, if Chelsea can provide them with the right player, and Kurt Zouma is one I’m told Sevilla are interested in taking, who will fit straight into the team and be a replacement in the squad, without cash changing hands, then that helps Sevilla in terms of making and accessing La Liga’s spend limits.

“So in this case, I’m told Chelsea have an advantage if they can get a player like Zouma, or one of their other defenders that Sevilla might be interested in, to move there because in this particular case, a cash-plus-player exchange deal is more attractive to Sevilla than a straight-cash offer.”