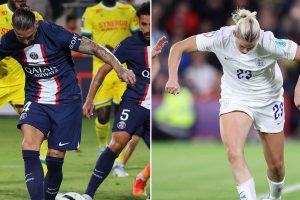 The former Real Madrid captain, 36, bagged the third goal in PSG's 4-0 drubbing over Nantes in the annual season curtain-raiser on Sunday evening, cheekily finding the back of the net with a neat backheel in the 57th minute.

The Coupe de France winners failed to clear a dangerous dinked ball into the area by Marco Verratti and Ramos was on hand to provide an improvised finish to put the game beyond any doubt and add yet another trophy to the Parisian's ever-extending cabinet.

The audacious backheel was almost a perfect recreation of Russo's sublime goal against Sweden when the Lionesses' substitute nutmegged former Chelsea shot-stopper Hedvig Lindahl in the semi-finals, sending fans into raptures on social media.

Unable to guide the ball home after a square pass from Fran Kirby, the Manchester United forward reacted quickly to the loose ball before sending the ball through Lindahl's legs with an impromptu strike in one of the highlights of Euro 2022.

HAVE YOUR SAY! Which backheel was better, Russo or Ramos? Let us know in the comments section.

"I could have made it a lot easier for myself if I’d scored the first one," Russo told reporters after England secured their spot in the tournament final. "But yeah, it fell nicely, but I don’t remember it too much about it, I just thought it was the quickest route to get it in the back of the net without having to turn.

"I was fortunate it went in. I didn’t really see it go in, so I don’t know how it went in but I just celebrated and I enjoyed the moment."