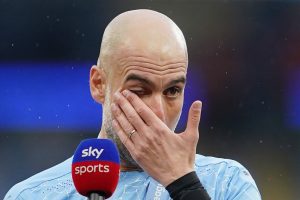 Aguero joined Barcelona as a free agent this week after playing his last match for City in the Champions League final defeat to Chelsea.

The Argentine spent 10 years at the club and came off the bench on his final Premier League appearance to score twice against Everton.

City manager Guardiola broke down while paying to tearful tribute to Aguero following the match, which saw the forward lift the Premier League for the fifth time.

But Aguero’s father, Leonel Del Castillo, has questioned whether Guardiola’s emotions were genuine, accusing the Spaniard of wanting to be the “star”.

“I don’t believe him. No, I don’t. I believe he ever wanted him [Aguero],” Del Castillo told Radio La Red when asked about Guardiola’s emotions during his tribute.

Asked if Guardiola’s tears were instead for show, Del Castillo replied: “Of course. He wants to be the star of all the teams he is in instead of the players.

“It’s incredible. He [Guardiola] says he [Aguero] is irreplaceable, and he doesn’t have him in the squad.

“These are things of Guardiola, he is a great coach. But from one day to the next he changes the players and you never know if you are going to start or not.”

Del Castillo went on to claim that three Premier League teams, Chelsea, Arsenal and Tottenham, were interested in signing Aguero before he agreed terms with Barcelona, where he will play will his childhood friend Lionel Messi.

“There were several clubs interested,” Del Castillo said. “Tottenham, Arsenal and Chelsea until the last moment were also interested. He is very happy now that everything is sorted.

“They [Messi and Aguero] have been friends since they were 15. They have always talked. I’m certain they will play together.”