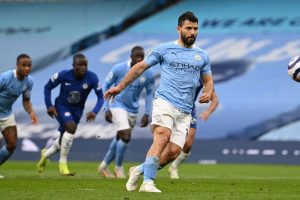 Aguero missed from the spot for Manchester City in their clash with Chelsea as Blues keeper Edouard Mendy easily saved the dinked effort.

Come off and they look brilliant. It's something England fans don't need reminding of following Andrea Pirlo's shootout effort at Euro 2012.

The Match of the Day host had attempted the chipped method during a clash with Brazil in 1992.

It quickly went down as one of the worst penalties of all time with Lineker fluffing his effort, and he clearly still remembers it.

In a clear tongue in cheek reference to his own mishap, Lineker posted on Twitter following Aguero's miss: "Why would you ever try and dink an important penalty? What a numpty."

Aguero swiftly apologised for his failure, which would have set City well on their way to the Premier League title.

A win would have meant City were crowned champions and had Aguero scored they would have gone 2-0 up.

As it was Chelsea fought back, eventually winning 2-1 and leaving Pep Guardiola's side waiting, with Aguero offering a grovelling apology.

The Argentine put: "I would like to apologise to my teammates, staff and supporters for missing the penalty. It was a bad decision and I take full responsibility."

Though Lineker again mocked: "Don’t worry about it, could happen to anyone."